Tony Blinken, Afghanistan's Collapse And The Sorrows Of Beltway Credentialism 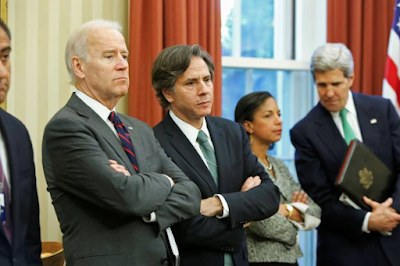 Wow! What a difference a year-and-a-half can make! Biden To Nominate Antony Blinken For Secretary Of State, NPR November 23, 2020. Blinken was going to “repair relationships between Washington and foreign governments and allies that have been strained under President Trump's 'America First" policy?! And serve as a confirmable alternative to Susan Rice, she of the Benghazi disaster in 2012?! And boost morale at the State Department that had been left "beleaguered" by the prior administration!?

Considered while the biggest foreign policy debacle in American history continues to unfold in Afghanistan, the advance notices Blinken received from Beltway insiders and the media are as breathtakingly naïve as Blinken himself has proven himself to be. The fact that Blinken has not resigned yet is a tribute both to his own personal cluelessness--- and to the arrogance borne of the blind credentialism that put him in a place to do so much ruinous damage to the country---especially our international partners. Blinken needs to go.

A graduate of Harvard University and Columbia Law School, Blinken began his foreign policy career during the Clinton administration. He worked as Democratic staff director for the U.S. Senate Foreign Relations Committee from 2002 to 2008, where he worked closely with Biden. He went on to serve as then-Vice President Biden's national security adviser.

Blinken is currently managing partner at WestExec Advisors, a firm he co-founded.

Biden's secretary of state pick, which will require Senate confirmation, was first reported by Bloomberg News and later confirmed by NPR.

…If confirmed, Blinken's early work, according to The Associated Press, would be focused heavily on repairing relationships between Washington and foreign governments and allies that have been strained under President Trump's "America First" policy, in which long-held alliances have frequently been challenged.

Blinken will also be tasked with boosting the beleaguered State Department, an agency that has experienced substantial turnover under Trump, with many longtime diplomats and career staffers leaving.

An Office of Inspector General (OIG) report from January found that, "Workforce management issues are pervasive, affecting programs and operations domestically and overseas and across functional areas and geographic regions."

A hiring freeze that was ordered by Trump in 2017 and that stretched until 2018 compounded the agency's ability to maintain staffing levels, the report went on to say.

"Employees told OIG that the hiring freeze contributed to excessive workloads, and the lack of transparency about the objectives intended to be achieved by the hiring freeze caused some to be concerned about losing their jobs," the report said.

Susan Rice, the former national security adviser under Obama, was rumored to have been on the short list for the top State Department job. However, by choosing Blinken, Biden avoids what was likely to have been a Senate battle over her nomination.

Rice would have faced criticism over the handling of the terrorist attack on the U.S. diplomatic compound in Benghazi, Libya, in 2012. Under pressure that year, Rice took herself out of consideration for the secretary of state's job after Clinton resigned the post.

Posted by William McGowan at 10:17 AM