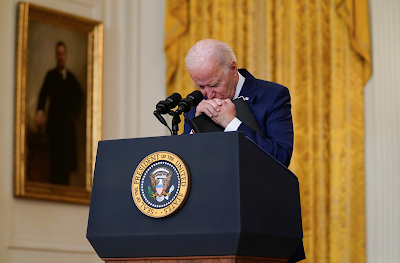 At yesterday’s White House press conference, Biden buried his head in his hands, looked close to tears and was completely unable to make whatever his point was, writes David Marcus in the Canadian Post-Millennial. “There has never been an image of an American president that projects such abject weakness,” Marcus notes. "We do not have a president. We have a crumbling old man. OK. Now what?”

After wrapping up his rambling remarks about a terrorist attack that killed US Marines on Thursday, President Biden moved on to questions. He informed the American people, whom he was addressing, that he had been "instructed" as to who should get the first question.

Who exactly was instructing the President of the United States? What other instructions does he obey? Did the American people elect a president? Or is Joe Biden just an old, sleepy eyed talking head? On Thursday, Americans got our answer.

The last question taken by Biden, we can only assume as a result of instruction, was granted to Fox News' Peter Doocy. Doocy asked Biden if he bears responsibility for the American lives lost in the terror attack. The President proceeded to engage in a bizarre back and forth with the reporter.

Then Biden buried his head in his hands, he looked close to tears, completely unable to make whatever his point was. There has never been an image of an American president that projects such abject weakness.

The United States effectively has no president. That must be distinctly understood at this point. He admitted this. Asked by Phillip Wegmann, White House correspondent for Real Clear Politics, if he had made the call to close American airbases before evacuation occurred, Biden said that it was what his military advisers told him to do.

The only decision Biden makes these days is what flavor ice cream he wants. Maybe.

Sen. Josh Hawley has called on Biden to resign in the wake of his administration's Afghan withdrawal disaster. It's a reasonable call, but also pointless. Joe Biden no more leads the nation than George Washington or Abe Lincoln do. He's a presidential portrait painted before its time. Nothing more.

Once they resign, moderate, serious minded Democrat senators must join Republicans in only confirming replacements that will reverse the horrendous foreign and national defense policies that have humiliated America on the world stage. Biden is president for three more years, Congress must act to ensure that the people instructing him are competent.

This is an emergency, and it is one we have never experienced before. The image of Joe Biden bowing his head in quiet, sad frustration is alarming. If there is a silver lining to this sad display it is that maybe Congress will act to take back control of our foreign policy. House Minority Leader Kevin McCarthy has called for the House to come back in session to get control of this situation. Of course, he is correct.

The Biden presidency is over, but it never really began. Clearly his cabinet is in control. Clearly they have been in control since day one. That cabinet decided to trust the Taliban to protect Americans. They are relying on terrorists who blow themselves up to act in their own self-interest. It is a macabre comedy. Those who hold Biden's strings must go, and they must go now.

All of this is much bigger than Afghanistan, as big as this humiliation is. This is the national security apparatus that is responsible for policies on Iran, North Korea, China, Ukraine, Yemen, everywhere. They blatantly cannot be trusted to protect American interests. That's not a hypothetical anymore. It's a tragedy.

Joe Biden, the 46th president, elected to bring back norms is irrelevant. Utterly, completely irrelevant. But we have him for three more years anyway. With loud, piercing, clarion calls we must demand the removal of his handlers, let congress replace them, and let us do better in the election of 2024. We do not have a president. We have a crumbling old man. OK. Now what?

Posted by William McGowan at 2:27 PM