Brown Lives Don’t Matter, At Least In The Kabul Evacuation Plan Tony Blinken Has Thrown Together 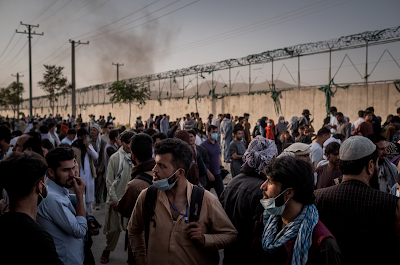 Amazing what a difference a year can make, at least if there’s a Democrat in power. Alternative hedline could be: Annals of Systemic Racism We Just Can’t Talk About. As the Times put it: “The State Department is frantically trying to track down U.S. citizens. Tens of thousands of Afghan allies will all but certainly be left behind.”

WASHINGTON — At least 1,500 American citizens remain in Afghanistan with just days left before the scheduled U.S. withdrawal from the country, but officials on Wednesday acknowledged the reality that tens of thousands of Afghan allies and others at high risk of Taliban reprisals would be left behind.

The sound of gunfire, and clouds of tear gas and black smoke, filled the air around the international airport in Kabul, the capital, as thousands of Afghans massed at the gates on Wednesday, desperate to escape ahead of the American military’s final departure on Aug. 31, after 20 years of war.

As military and government charter flights took off every 45 minutes as part of an airlift, Biden administration officials said they had evacuated about 82,300 people since Aug. 14, the day before Kabul fell to the Taliban. Around 4,500 of them were American citizens, with 500 more expected to depart soon.

But Secretary of State Antony J. Blinken said the government was trying to track down around 1,000 American citizens still believed to be in Afghanistan who had not responded to a frantic flurry of emails, phone calls or other messages offering to evacuate them.

Posted by William McGowan at 6:24 PM