Battle Not With Monsters: It’s Biden & The Dems Who Might Have the ‘Fascism’ Problem 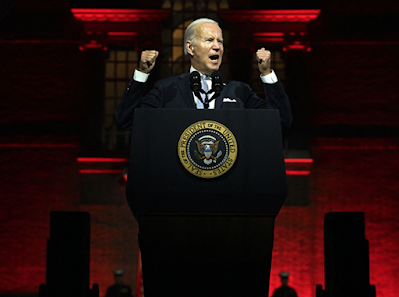 “If there are fascists in America these days, they are apt to be found among the tribes of the left,” writes Lance Morrow, in a WSJ column headlined Biden’s Speech Had It All Backward that upends ideological labelling, political virtue-signaling and self-stroking liberal historical narratives about “hate” and “enemies.” You can argue with the way he equates Trumpist America First with that of Robert Taft, pre Pearl Harbor. But he does capture the moral projection at the center of what Biden called “The Battle For The Soul of the Nation.” As Nietzsche warned: “Be careful when hunting monsters, lest you become one.”

The Democrats have the “fascist” business wrong.

Donald Trump isn’t a fascist, or even a semi-fascist, in President Biden’s term. Mr. Trump is an opportunist. His ideology is coextensive with his temperament: In both, he is an anarcho-narcissist. He is Elmer Gantry, or the Music Man, if Harold Hill had been trained in the black arts by Roy Cohn. He is what you might get by crossing the Wizard of Oz with Willie Sutton, who explained that he robbed banks because “that’s where the money is.”

As for Mr. Trump’s followers, they belong to the Church of American Nostalgia. They are Norman Rockwellians, or Eisenhowerites. They regard themselves, not without reason, as the last sane Americans. You might think of them as American masculinity in exile; like James Fenimore Cooper’s Natty Bumppo, living in the forest has made their manners rough.

If there are fascists in America these days, they are apt to be found among the tribes of the left. They are Mr. Biden and his people (including the lion’s share of the media), whose opinions have, since Jan. 6, 2021, hardened into absolute faith that any party or political belief system except their own is illegitimate—impermissible, inhuman, monstrous and (a nice touch) a threat to democracy. The evolution of their overprivileged emotions—their sentimentality gone fanatic—has led them, in 2022, to embrace Mussolini’s formula: “All within the state, nothing outside the state, nothing against the state.” Or against the party. (People forget, if they ever knew it, that both Hitler and Mussolini began as socialists). The state and the Democratic Party must speak and act as one, suppressing all dissent. America must conform to the orthodoxy—to the Chinese finger-traps of diversity-or-else and open borders—and rejoice in mandatory drag shows and all such theater of “gender.” Meantime, their man in the White House invokes emergency powers to forgive student debt and their thinkers wonder whether the Constitution and the separation of powers are all they’re cracked up to be.

Mr. Trump and his followers, believe it or not, are essentially antifascists: They want the state to stand aside, to impose the least possible interference and allow market forces and entrepreneurial energies to work. Freedom isn’t fascism. Mr. Biden and his vast tribe are essentially enemies of freedom, although most of them haven’t thought the matter through. Freedom, the essential American value, isn’t on their minds. They desire maximum—that is, total—state or party control of all aspects of American life, including what people say and think. Seventy-four years after George Orwell wrote “1984,” such control (by way of surveillance cameras, social-media companies and the Internal Revenue Service, now to be shockingly augmented by 87,000 new employees) is entirely feasible. The left yearns for power and authoritarian order. It is Faust’s bargain; freedom is forfeit.

Mr. Trump, the canniest showman in the White House since Franklin D. Roosevelt, introduced into 21st-century politics what seemed to be new idioms of hatred, a freestyle candor of the id. Doing so, he provoked his enemies—and finally Mr. Biden—to respond in kind: a big mistake. In the early 1950s, when Sen. Joseph McCarthy was loose in the land, and roughly half the country supported his anticommunist inquisition, President Eisenhower wisely decided, “I will not get into the gutter with this guy.” It took a while for McCarthy to implode.

When Mr. Biden spoke in Philadelphia the other night, he might have been thinking of FDR’s speech at Madison Square Garden on the night of Oct. 31, 1936, at the end of his presidential campaign against Alf Landon—and, by the way, three months before he tried to pack the Supreme Court. That night, Roosevelt boasted that his enemies (Republicans, plutocrats, et al.) “are unanimous in their hate for me.” With a flourish, he added, “I welcome their hatred!

Americans, lamenting the divisions of 2022 and, some of them, entertaining fantasies of a new civil war, should refresh their historical memories. The country has been bitterly divided against itself any number of times. The hatreds and convulsions of the 1930s (the era of Huey Long and Father Charles Coughlin and the Silver Shirts, of homegrown tribes of Trotskyists and Stalinists) culminated in the ferocious battle between isolationists and internationalists that lasted until the Sunday morning of Pearl Harbor.

The motif of political hatred returned to America almost as soon as World War II ended. The Alger Hiss case of 1948 warmed up the enmities, and McCarthy blew on the coals and turned half of the country against the other half. Such hatred seems cyclical. The 1960s (assassinations, civil rights battles, urban riots, the Vietnam War) had Americans at one another’s throats again. Those eruptions of political rage occurred in the years when the baby boomers and Joe Biden (who was a few years older) came of age and acquired their idea of what America is all about.

That night in 1936, Roosevelt, warming to the language of hatred, suggested that his enemies should get out of the country: “Let them emigrate and try their lot under some foreign flag.” Mr. Biden—who, as he spoke in Philadelphia, was bathed in a lurid red light that seemed, as it were, ineptly theological—was content to cast his foes into outer darkness.

Posted by William McGowan at 12:37 PM No comments: