Biden Team Projects An Equanimity That Is ‘The Definition Of Gaslighting,’ says Politico 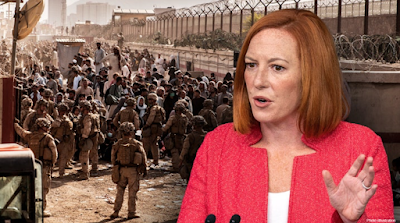 As chaos unfolds at Kabul airport, Team Biden projects calm, writes Politico, while the President and his minions employ rhetoric completely disconnected from conditions on the ground.

Tens of thousands of Afghans awaiting U.S. visas and thousands of American citizens are still stuck in Kabul, unable to find safe passage through frantic crowds, Taliban checkpoints and Afghan guards stationed outside the airport.

Gunfire erupted outside of the north gate of Hamid Karzai International Airport on Monday, killing a number of Afghan security forces. American officials have repeatedly had to close the gates for extended periods, leading guards to turn away even U.S. passport holders.

Multiple sources point to deteriorating conditions inside the airport, including lack of power and sanitation. And tension has emerged between American troops on the ground and State Department officials trying to extract U.S. citizens and Afghan allies.

Meanwhile, the West Wing is looking increasingly disconnected from reality as the Biden White House strives to project a sense of calm competence — even as the Taliban tighten their grip on Afghanistan.

“We are actually overperforming in terms of the evacuation numbers,” national security adviser Jake Sullivan told reporters on Monday of the massive evacuation effort underway at Kabul airport to extract thousands of Americans and tens of thousands of Afghan allies from the city.

“If you look at what we're doing now and taking — evacuating thousands of people every day, it really has been a tremendous piece of work,” Defense Secretary Lloyd Austin told ABC’s “This Week” on Sunday.

While the evacuation has significantly ramped up in recent days, the reality on the ground belies the narrative that the situation is under control. The scenes around Kabul airport have been marked by violence, disorganization, bureaucratic in-fighting and delays, according to video and text exchanges viewed by POLITICO.

The result is an administration that appears increasingly out of touch, as reports from Kabul continue to reflect a chaotic evacuation.

“I don’t think the president’s rhetoric matches the conditions on the ground,” said Jenna Ben-Yehuda, a 12-year veteran of the Bush and Obama State Department and president of the Truman Center, which is coordinating with other groups to try to evacuate Afghan allies.

“They keep saying this was inevitable, but there absolutely was a way to avoid this — if that’s not the definition of gaslighting I don’t what is,” said Chris Purdy, the project manager of the Veterans for American Ideals program at Human Rights First, which has been part of the coalition to help evacuate people from Afghanistan.

Posted by William McGowan at 1:56 PM