Notes On Twee: Yarn Police Unravel Over Trump Supporters Inside Their Circle 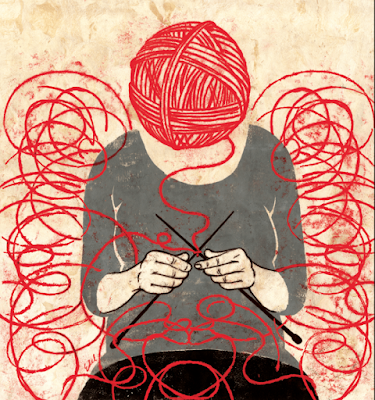 More news about the nation’s fraying political, social and cultural fabric came the other day from the Washington Post. According to the Post,  Ravelry, an 8-million-strong social network known as the “Facebook of knitting,” has banned all support for Trump and his administration. “We cannot provide a space that is inclusive of all and also allow support for open white supremacy,” Ravelry declared. “Support of the Trump administration is undeniably support for white supremacy.”

According to the Post, the ban cuts across all aspects of the site, including “forum posts, projects, patterns, profiles” and anything else.

The site did not explain which Trump policies it believes signify white supremacist ideology, taking pains to note that “We are definitely not banning conservative politics.” But it added that  “Hate groups and intolerance are different from other types of political positions,” and warned users not to goad others into voicing support for Trump.

The Post noted that “Some longtime Ravelry users welcomed the move, saying the toxicity of online political discourse has plagued their quiet hobbyist refuge, though others expressed concern over the policy.” One self-proclaimed knitter tweeted that “Politicizing ravelry leaves a bad taste in my mouth.

Ravelry said its policy was largely inspired by RPG.net, a hub for role-playing game enthusiasts, which banned public support of Trump in October. In announcing its ban, RPG.netsaid that Trump’s “public comments, policies, and the makeup of his administration are so wholly incompatible with our values that formal political neutrality is not tenable.”

Posted by William McGowan at 2:51 PM No comments:

BEFORE STONEWALL: How A Forgotten Case Of Homosexual Blackmail Changed the Course of Gay Civil Rights


From Slate, here's a link to an exhaustively reported account which I published in 2012 about America's largest case of gay extortion, illustrated with rare and gritty Midnight Cowboy photographs. Hollywood (Lawrence Gordon Productions) sees a noir period thriller somewhere between that classic and L.A. Confidential, depicting a hinge moment in the history of gay civil rights analogous to the turning point in the struggle for racial equality that was dramatized so powerfully in Mississippi Burning.

The case, known in law enforcement circles as "The Chickens and the Bulls," dates from the late 1950’s and early 1960’s and involved a nationwide ring of blackmailers who posed as corrupt Vice Squad detectives and targeted closeted pillars-of-the-establishment: admirals, generals, congressmen, society doctors, Ivy League professors and high-profile film and television entertainers.  The ring operated for ten years in New York, Chicago, Washington and LA. As ruthless as it was brazen, the ring made millions and brought misery to scores of victims and their families before being broken up in a joint investigation by the FBI and the Special Rackets Squad of the Manhattan District Attorney’s Office which was led at the time by the legendary Frank Hogan—aka “Mr Integrity.”

The press conference that Hogan held in early March, 1966 to announce the ring’s breakup inspired this front page headline in the New York Times the next day, the wording of which is rather shocking by today's more diversity-sensitive standards:

The case is significant because it represents the first time that the American law enforcement apparatus cranked up on behalf of gay men who were routinely victimized by extortion schemes like the one described in “The Chickens and the Bulls.” Most of the victims in this scheme, as in other schemes like it, would have been married, or if not married, certainly not "out." In those unenlightened days those who did not pay up and were exposed could reliably count on losing their families, as well as their jobs, businesses or careers. Some victims were beaten to death by thugs whose intimidation tactics went too far. At least one victim, a US Navy admiral who'd been a decorated WWII hero, committed suicide.
Aside from its historical importance, the story was compelling---and attractive to the movies--- for many reasons, among them the fascinating character “arc” of the one of the ringleaders---a Jimmy Cagney-like tough from Manhattan’s lower west side named Edward “Mother” Murphy.” After tormenting gay men as an extortionist, Murphy, who was himself gay and was said to be at the Stonewall Inn the night of the infamous uprising in 1969, transformed himself into one of the gay community’s most ardent champions. In fact, his work on behalf of early AIDS victims led to him being named the posthumous Grand Marshal of the Gay Pride Parade in 1984, the gay community apparently unconcerned by, or ignorant of, Murphy's rather risque criminal past.

Below is a picture that gay activist and archivist Randy Wicker took of Murphy, “The Original Stonewaller,” riding with some of his entourage during a previous year's parade. Wicker told me he mounted a one-man campaign to derail Murphy's posthumous Grand Marshall-ship, but the gay community's memory was short and its ranks were swelling fast. "It was like that Stephen Sondheim song," Wicker told me. "Another hundred people just got off of the train." 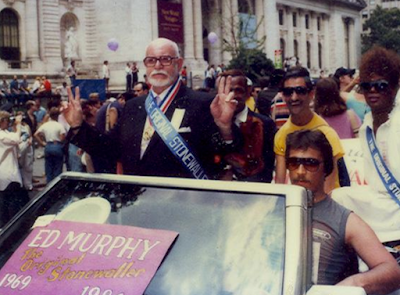 Posted by William McGowan at 8:31 AM No comments:

Too 'Woke' To Work: Jussie Smollett's Many Defenders & Enablers In The Media 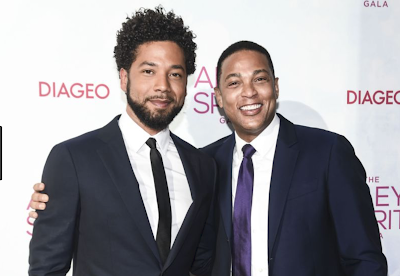 Despite Getting His Story Wrong, There's Been No Shame Or Contrition Among the Press.

From the American Conservative:
In March, the National Association of Black Journalists (NABJ) announced that it had put CNN on a “special media monitoring list” over concerns about a lack of diversity and the network’s president’s refusal to even discuss the lack of black executives at the liberal news organization.
CNN doesn’t have a single black executive producer, or vice president on its news side, the NABJ charged. The black journalist organization also alleged that CNN’s president Jeff Zucker refused a scheduled meeting to discuss the problem with a four-member NABJ delegation.
As a result, the NABJ threatened that it would assign a special team of its members to “perform further research and an analysis of CNN’s diversity, inclusion and equity practices,” particularly as they pertain to CNN’s news decision-making capacities. The group also called for a “civil rights audit” which would examine the company’s hiring, promotion and compensation practices involving black employees. Such audits are usually performed by Justice Department officials on local and state government entities in anticipation of federal consent decrees. The NABJ was claiming CNN might have more in common than it would like to admit with racially troubled police departments and underperforming school districts being monitored by the federal government.
CNN declared that it would be more than happy to sit with NABJ, but the meeting could not include the organization’s vice president, Roland Martin. During the 2016 Democratic primaries, Martin was accused of slipping questions verbatim to Hillary Clinton’s campaign before a town hall debate with Bernie Sanders. He did it in coordination with then DNC chairwoman and CNN contributor Donna Brazile, who was fired from the network for the violation. According to CNN, “Mr. Martin displayed an unprecedented and egregious lack of journalistic ethics and integrity by leaking questions prior to the town hall,” which had inflicted “significant and reckless damage” to the network.”
The NABJ-CNN contretemps highlighted lingering raw feelings and bad memories from 2016. But it is no sign that the media will be any less “woke” in its coverage of the next presidential campaign, as President Donald Trump seeks reelection. Their coverage of Empire actor Jussie Smollett’s hate crime hoax, for example, says otherwise.

Even though he had a direct pipeline to Smollett beginning the very night of the alleged attack, CNN’s Don Lemon was hardly in a rush to ask tough questions. Lemon spoke to Smollett on the phone belonging to a mutual friend at Northwestern Memorial Hospital where the Empire star was being treated. Lemon said that a shaken and angry but resilient Smollett described the attack, telling the anchor that “during times of trauma, grief and pain there is still a responsibility to lead with love.” It was all he knew, Lemon said Smollett declared, “And that can’t get kicked out of me.”