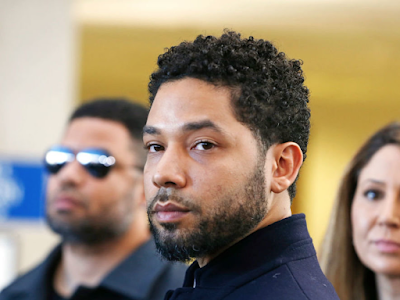 Jussie Smollett, Former 'Empire' Actor, Has Been Indicted Again In Illinois
NPR:
A case that caused consternation and controversy in Chicago last year is entering a fresh chapter. On Tuesday afternoon, Jussie Smollett, a now-former actor on the show Empire, was again indicted by a grand jury in Cook County, Ill., for filing false police reports that he had been the victim of a hate crime near his home in January 2019.
This is the second time Smollett has been indicted for filing a false police report. Last March 7, a grand jury returned a 16-count indictment. But less than a month later, the Cook County State's Attorney Office dropped all charges against Smollett, a decision that ignited heated disagreement in Chicago and beyond.
A press release issued Tuesday by the special prosecutor, Dan Webb, said that he had concluded that further prosecution of Jussie Smollett is ''in the interest of justice."
See this TAC piece, 2019…
Posted by William McGowan at 7:29 PM 8 comments: 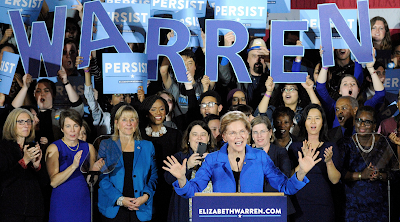 More Sorrows of Woke, this time from Politico: Women of Color Bolt Warren’s Nevada Campaign in Frustration. (italics for emphasis.)

A half-dozen women of color have departed Elizabeth Warren’s Nevada campaign in the run-up to the state’s caucuses with complaints of a toxic work environment in which minorities felt tokenized and senior leadership was at loggerheads.

The six staffers have left the roughly 70-person Nevada team since November, during a critical stretch of the race. Three of them said they felt marginalized by the campaign, a situation they said didn’t change or worsened after they took their concerns to their superiors or to human resources staff.

“During the time I was employed with Nevada for Warren, there was definitely something wrong with the culture,” said Megan Lewis, a field organizer who joined the campaign in May and departed in December. “I filed a complaint with HR, but the follow-up I received left me feeling as though I needed to make myself smaller or change who I was to fit into the office culture.”

Another recently departed staffer, also a field organizer, granted anonymity because she feared reprisal, echoed that sentiment. “I felt like a problem — like I was there to literally bring color into the space but not the knowledge and voice that comes with it,” she said in an interview.

She added: “We all were routinely silenced and not given a meaningful chance on the campaign. Complaints, comments, advice, and grievances were met with an earnest shake of the head and progressive buzzwords but not much else.” A third former field organizer who was also granted anonymity said those descriptions matched her own experience.

The other three women who recently left the campaign did not respond to requests for comment. One of the departed staffers declined to be interviewed because she feared professional consequences in an arena where it's already difficult for women of color to advance, according to another ex-Warren employee who spoke with her about the situation.

The turmoil in Warren’s Nevada operation comes ahead of the state’s Feb. 22 caucuses. Nevada is important not only because of its early spot on the nominating calendar but because it is the first chance for candidates to prove that their appeal extends beyond white voters who dominate the Democratic electorates in Iowa and New Hampshire.

The problems in Warren’s Nevada campaign heighten the importance of a rebound in New Hampshire after a third-place finish in the Iowa caucuses. Of the first four voting states, Nevada is the one Warren has visited the least: She has spent just 12 days there, another factor that dispirited the state’s staff. This week, her campaign also scaled back its television ads in the state by about $140,000.

Warren’s campaign did not dispute the women’s accounts but suggested they do not reflect a broader problem within her large, 31-state organization.

“We strive for an inclusive environment and work hard to learn and improve,” Warren campaign spokesperson Kristen Orthman said in a statement. “We have an organization of more than a thousand people, and whenever we hear concerns, we take them seriously. It’s important that everyone who is part of our team has a voice and can be heard. That’s why we are proud that we have a unionized staff and clear processes for issues to be addressed.”

The women said the issues within the campaign hurt the larger effort to marshal votes, particularly in the state's large Latino communities. Spanish-language literature didn’t arrive until late in the fall despite repeated requests from many staffers. There were too few Spanish-speaking organizers, the former staffers said, despite asking the campaign to hire more. They felt it was a constant battle to set up events in Spanish. (SPANISH!!!!!)

The problems were exacerbated by conflicting leadership at the top. Warren campaign headquarters in Boston quietly dispatched Democratic operative Kevin Brown to Nevada in November. One of the former female staffers, as well as a separate former Warren official in the state who was not authorized to speak on the matter, said it was unclear who was in charge, Brown or state director Suzy Smith.

The tumult in Warren’s Nevada operation comes during a larger transition in Democratic campaigns, as a new generation of women and people of color fill the ranks of organizers and campaign managers. For generations, campaigns have been dominated by white men, especially at the top. But this year’s Democratic field has seen record diversity among campaign managers, including Warren’s Roger Lau who is the first Asian-American campaign manager for a major presidential candidate.

Some campaigns have struggled with these changes, including Pete Buttigieg’s, which has had some staffers of color depart and faced internal complaints from minority staffers.

All three departed Warren staffers said they did not want to hurt the Massachusetts senator's candidacy but decided to talk to a reporter because they believe their issues are not uncommon on campaigns and that will only change if the issues are aired. Two of them said they are unsure whether they will still support Warren after their experience, but Lewis said she will be caucusing for her.

She said she felt compelled to speak out because she believed the campaign’s internal systems failed and needed to be fixed. Too often, Lewis said, such problems are ignored or swept under the rug because people fear damaging the larger cause.

“Every election will always be the most important election of our lifetimes,” Lewis said.

“Organizing culture needs to change because the fact is our well-being is more important than any election. I hope this starts a conversation that helps facilitate personal reflection about ways we can change campaign culture.”