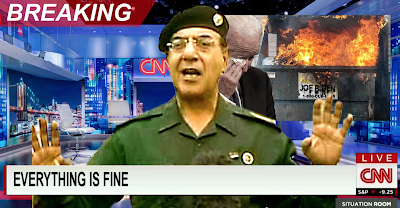 Al Qaeda is more than a remnant in Afghanistan, writes Washington Post columnist Marc Thiessen, highlighting the disconnection from reality that Joe Biden seems to share with Saddam Hussein’s Minister of Media & Foreign Affairs Muhammed Saeed al-Sahhaf, aka “Baghdad Bob.” In fact Al Qaeda was pivotal in the Taliban’s blitz. The result is that “Biden has handed the global jihadist movement a new radical Islamic emirate in Afghanistan to replace it.”

Remember “Baghdad Bob,” the Iraqi information minister who, as U.S. forces entered the capital, insisted that there were no Americans in Baghdad? That’s what President Biden is beginning to sound like with his delusional insistence that no Americans were having trouble getting to the Kabul airport, no allies were calling into question the United States’ credibility, and that the United States had no interest in Afghanistan because al-Qaeda was “gone.”

Really? If that last claim were true, then how did the Afghan military manage to kill al-Qaeda’s second-in-command, Abu Muhsin al-Masri, in Afghanistan’s Ghazni province last October? Al-Masri was on theFBI’s most wanted list for conspiracy to kill Americans. If al-Qaeda poses no threat to the United States in Afghanistan, as Biden claims, what was a senior al-Qaeda leader focused on external operations doing there? And why is Sirajuddin Haqqani, an al-Qaeda-linked U.S.-designated terrorist with a $5 million reward for information leading to his capture, serving as the Taliban’s second-in-command? His network was recently placed in charge of security in Kabul. The fact is al-Qaeda is not only present in Afghanistan, but deeply embedded within the Taliban. According to the New Yorker’s Robin Wright, there are actually more al-Qaeda fighters in Afghanistan now than there were before 9/11, and al-Qaeda “was pivotal in the Taliban’s sweep across Afghanistan.”

Yet on Fox News Sunday, Secretary of State Antony Blinken dismissed al-Qaeda’s Afghan presence as nothing more than “remnants” posing no serious danger to the homeland. It’s not the first time he’s minimized a terrorist threat, only to be proved disastrously wrong. In December 2011, there were only about 700 Islamic State “remnants” in Iraq when Biden presided over the disastrous U.S. withdrawal there — but by 2014, a CIA analysis found that the Islamic State had grown to as many as 31,500 fighters. Yet Blinken — who was then serving as deputy national security adviser — continued to underestimate the danger these terrorists posed. In an August 2014 interview, he insisted that the Islamic State’s “focus is not on attacking the U.S. homeland or attacking our interests here in the United States or abroad. It’s focused intently on trying to create a caliphate now in Iraq.”

Soon after he spoke those words, the Islamic State and those inspired by it launched a wave of attacks on the West — including January 2015 attacks on the Charlie Hebdo magazine offices and a Jewish deli in Paris; November 2015 attacks on a night club, soccer stadium and restaurants in Paris that killed 130 people; March 2016 bombings of the Brussels airport and subway station; and a July 2016 attack in Nice in which an Islamic State terrorist drove a truck into crowds celebrating Bastille Day, killing 84 people. According to CNN, by July 2016, the Islamic State had carried out 143 attacks in 29 countries that killed more than 2,000 people. It was only after the group began to attack the West that the Obama administration finally sent U.S. forces back to Iraq to deal with the debacle it created.

Now, Biden and Blinken are underestimating the terrorist threat once again. But this time, the disaster they created in Afghanistan will be far more difficult to clean up. In Iraq, we left behind a friendly government and bases to which U.S. forces could return to from which to take on the terrorists. In Afghanistan, the Taliban is in full control, and we have no bases to which we can return when the terrorist danger inevitably reemerges.

Other terrorist hotspots — such as Iraq, Syria, Yemen and Somalia — have coastlines that allow us to project power from the sea. But Afghanistan is a landlocked country, surrounded by hostile states. The only viable routes in are over either Iranian or Pakistani airspace. We face not only a challenge of distance, but of topography — as the forbidding Hindu Kush mountains provide the perfect cover for terrorists. “We’re talking about the problem of finding terrorist needles in 15,000-foot haystacks, which was hard to do even when we had troops in country,” explains Fred Kagan, director of the American Enterprise Institute’s Critical Threats Project. Even if we somehow manage to obtain intelligence on an al-Qaeda target and overflight permission, we’ll have to hope and pray that the target will still be there by the time our planes take off from bases in the Persian Gulf or a distant aircraft carrier. And without nearby bases, we have limited capability to extract American pilots if a mission goes wrong.

In other words, Biden’s claim that we have an “over the horizon” capability to combat an al-Qaeda resurgence is a joke. It took more than seven years for the United States to drive the Islamic State from the caliphate Biden handed them in 2011. Now, Biden has handed the global jihadist movement a new radical Islamic emirate in Afghanistan to replace it.

Posted by William McGowan at 11:29 AM