On A Silent Retreat Along The Hudson, A Skeptic Quietly Looks For 'The Present Possibility of God' 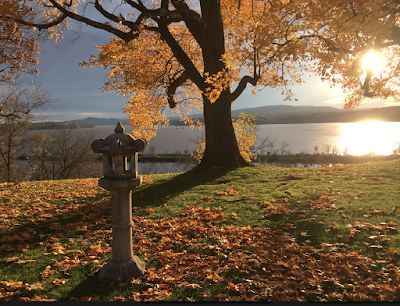 Here’s a Christmas story for the quietly faithful. From the WSJ, December, 1998: Quiet, Please.

"An acre of woods or seashore is not necessary to meet God." So notes the Jesuit writer William Barry, pointing out that it was in the cosmopolitan tumult of 16th-century Paris, and not in some pastoral setting, that St. Ignatius of Loyola gave spiritual instruction to the men who helped him found the Society of Jesus.

But standing on the grounds of the Linwood Spiritual Center in Rhinebeck, N.Y., I can't help thinking that, for the average spiritually challenged person, a little solitary contact with nature might be a good thing. Located 90 miles north of New York City, the center sits on a promontory at one of the Hudson River's most majestic points. By day, the river sparkles with late autumn sunlight. At night the landscape is wrapped in absolute darkness.

Apparently mine isn't the only soul that finds such a setting propitious. Around the country, men and women who hope to feel "the present possibility of God," as the theologians put it, are seeking out places like Linwood, drawn as much by the relief from urban stress as by the regimens of silence that are often imposed. "Sanctuaries: A Guide to Lodgings in Monasteries, Abbeys and Retreats" lists more than 1,200 retreat centers in the U.S.

Although most religious traditions value contemplation, it is generally the Roman Catholic religious orders that run such retreats. Linwood -- once a home of Jacob Rupert Schalk, a brewery magnate -- became the property of the Sisters of Ursula in 1963. Founded in France in 1606, the Sisters of Ursula, like their Jesuit brethren, try to fuse contemplative withdrawal with worldly engagement.

The nuns at Linwood have not taken lifelong vows of silence, but they do follow the precepts of Ignatian Spirituality, which commend periods of silence as a means of achieving the mystical recognition that God is in all things. Some of the nuns function as "spiritual directors" to visitors. In the course of a year, more than a 1,000 retreaters from all walks of life come to stay at Linwood, many spending their vacation time there.

According to the Christian mystical tradition, silence is not just a pause between words but a medium that allows one to feel God "principally stirring and working," as the great Jesuit scholar William Johnston has written. There is a common misconception that silence is the means through which the contemplative achieves a oneness with God. In fact, the point of silence is to allow one to recognize that the oneness already exists, and that feelings of loneliness and despair are unfounded.

As I made my own plans for Linwood, I thought that -- at the simplest level -- four or five days in retreat would be a break from the stress of a turbulent period in my life. But I also hoped for the kind of transformative experience that would reassure me that there was in fact A Plan and that God had included me in it. Abstractly, I believed in God, but it had been a long time since I could say I had felt his Presence.

On the train I fretted over whether I'd find the experience of silence liberating or oppressive. I had read stories about people who had sought out the quiet of a monastic retreat only to flee, unnerved by the intensity of the introspection.

Once I settled into the routine, however -- hours of solitary walking, reading and exercising punctuated by basic meals and an hour a day in conference with my spiritual director -- silence seemed like the most natural thing in the world. Although there were plenty of people around, I found myself not really interested in conversation, except (once) to find out who won the D'Amato-Schumer Senate race. Hardly a hair shirt, the verbal deprivation and solitude seemed almost luxurious.

Sitting alone in the library one night, I seemed to sense the point "where something in the silence takes over and becomes active on its own," to borrow a phrase from the cleric Morton Kelsey. Touched by a feeling of surpassing contentment, I came about as close to a "still point" as I have ever come. The silence made the air lighter, more oxygenated -- clearer, even as it had become more richly textured. Silence really wasn't the absence of media, I began to sense. It was a medium unto itself, flooded with messages of subtle power.

Not that the regime of silence was all sweetness and light. The bliss of night-time library visits competed with alternating states of anger and frustration on my daily walks. Anger, in part, at living in a media culture that so readily marginalized anything to do with the sacred, a culture ready to drown authentic spiritual striving in an ocean of irony. (I could just hear my friends groaning as I talked to them about this piece.) Frustration over the fact that, no matter how hard I tried to convert the feeling of contentment into a transfiguring spiritual dividend, I couldn't. Listening to the honkings of the geese in the bogs below, I began to wonder whether I was being mocked.

Gradually, though, a new insight took hold, arriving from where I do not know. Although the Bible often presents spiritual transformation in dramatic terms -- the burning bush, the blinding light -- in fact for most people it does not come in blows. Spiritual apprehension is rather a subtle and incremental thing, in which an awareness of God develops slowly and deepens over time.

I had entered the retreat with the hope of being bowled over. It was only after I realized how unrealistic this expectation was that I began to feel the nonepiphany epiphany that made the trip worthwhile. Although the "present possibility of God" remained for me only that -- a possibility -- there was nevertheless a fortifying certainty of heart. No blinding light but a foundation to build on.

After five days, breaking the silence was a bit of a let-down, although it did offer me a chance to explore another kind of mystery. On my first night at Linwood, one of the groundskeepers had urged me to try to get a look at an albino deer that they had started seeing a few months before, around the time that Sister Rosemary McNamara, an albino herself, had arrived from North Carolina. I thought the story was just a hazing ritual, but this didn't stop me from patrolling the grounds after dinner, squinting into the dark, looking for the unicorn, so to speak.

Ending my silence, I couldn't help asking Sister Rosemary about the deer. "That would be my cousin, Belva," she said, smiling. "The name is Russian -- for white." As elating as it was to confirm the existence of this creature, the words that followed left a deeper impression.

I confided to her that I was worried that everything I had sensed that week was going to fade as soon as I left. She sat across the lunch table, the afternoon sun turning her into a pillar of blazing light. "You can either let this experience change your life, or you can say it was all a delusion," she said quite directly. "It's up to you."

Posted by William McGowan at 10:06 AM No comments: