When Trope Is Truth: Many Things Labelled 'Anti-Semitic' Are Just Ethnically & Politically Inconvenient 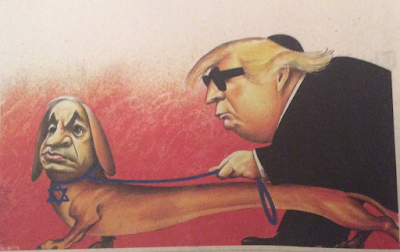 Posted by William McGowan at 2:33 PM No comments:

When Trope Is Truth: How Pro-Israel Billionaires Are Underwriting Trump's Iran War Gambit 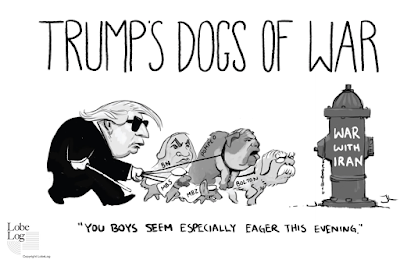 One good thing J Street has done — in addition to its valiant organizing against an Iran war — is to split the Israel lobby into a liberal-Zionist wing in the Democratic Party and a rightwing AIPAC lobby that operates in both parties. That ought to make it easier to take on the neocons on Iran: they’re AIPAC and everyone to the right.
There are still a bloc of Democratic neocons. Congresspeople Josh Gottheimerand Elaine Luria, for instance, were both against the Iran deal. Luria took a trip to Israel on AIPAC’s tab after she was elected. Gottheimer is now a centrist force in the party; and as Ryan Grim reported in the Intercept, Gottheimer and Luria recently met with Rep. Rashida Tlaib to rein in her criticisms of Israel:
Luria began by saying that she had met with Israeli Prime Minister Benjamin Netanyahu six weeks earlier, and Tlaib tried to break the ice with a joke: “How’s the two-state solution going?”… [Gottheimer says he] and Luria “sat down with Congresswoman Tlaib to have an open, honest discussion about anti-Semitic comments on dual loyalty and other anti-Semitic tropes that the Congressman and many other members of Congress found deeply disturbing. As requested by leadership, the Congressman brought copies of statements that he found disturbingly anti-Semitic.
Obviously, Gottheimer regards the Israel lobby and its donors as key to Democratic victories. Lately he sought to make the historic resolution to end support for the Saudi war on Yemen “a referendum on support for Israel” and against BDS, Grim reports.
I don’t think you can win against Gottheimer and Luria without talking about the rightwing Israel lobby. Whether you call it the Greater Israel Lobby or the Likud lobby (as Andrew Sullivan and Peter Beinart have done), or blame the “Jewish establishment” for its half century of supporting occupation, as IfNotNow does, the neocons need to be held to account, because they are powerful.
And yes, Jews have a special role to play here. Neoconservatism began inside the Jewish intellectual community as an appeal to Jews to support a militant U.S. foreign policy as being in the Jewish interest because Israel needed the U.S. to be strong, as Irving Kristol and Norman Podhoretz put it back in the ’70s in the wake of the ’67 war. Neoconservatism attracted many non-Jews  (from Bolton to Doran), but Israel as a Jewish homeland remains a central concern. This is not ideological sport for neocons: At the heart of neoconservative ideology is a belief about history, and the dangers of powerlessness revealed in the Holocaust. Important rightwing actors like Doug Feith and Hart Hastenbase their politics in the genocide/ethnic cleansing that targeted their families in Europe. They speak to a sacralized Jewish trauma that has had vast political consequences, and that Jews must heal if U.S. policy is going to bend toward human rights.
Neoconservatism has been in our politics for more than 40 years, going back to the rise of Scoop Jackson. It has been well-funded and it has jumped from one party to another depending on the hospitality (Jimmy Carter and George H.W. Bush gave it the brush) and it has had disastrous results. Whoever decided to invade Iraq– neocons had a lot to do with the decision. And now neocons have taken up residence in the Trump administration and they are pushing for a war with Iran without a thought for what they have achieved in the Levant.
You can’t effectively fight such a force without saying what they are. They should be called out as militant Zionists who have never had a critical word to say about Israel or its rightwing leaders; and their plans should be denounced as ones that don’t serve the American people.

Posted by William McGowan at 1:25 PM No comments:

Annals Of Media McCarthyism: Why Journalists Are Still Afraid To Debate Diversity 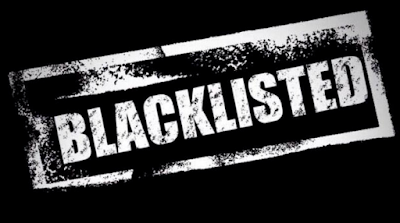 This 2003 WSJ article, headlined "Unfit To Print," describes what it was like to be targeted by blacklisters for raising tough questions about the media's diversity crusade and the rise of multicultural orthodoxy in American journalism. "Traveling through the intersection of journalism and our nation's racial tensions requires a hard head, if not a helmet." (And it's only gotten worse since then.) 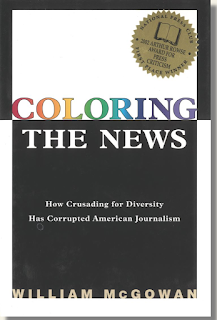 Posted by William McGowan at 7:15 AM No comments: