We Gotta Talk About Dad: Brits Seem Capable Of Noticing The Obvious, So Why Can't Americans? 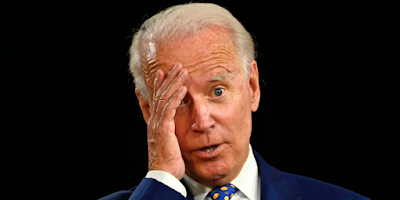 “The Unspoken Truth Is that Biden Is Just Too Old” by Tim Stanley, Telegraph (UK):

When Joe Biden addressed the press on Friday, slurring and stumbling over his words, I was reminded of the moment in 1985 when the Soviets dragged Konstantin Chernenko, the terminally ill leader of the USSR, out of his hospital bed to vote in an election on TV. It wasn’t just desperate, it was cruel.

Biden is too old to be president, which isn’t to say that an old person can’t lead. Donald Trump is only three years younger, Pope Francis six years older, and Moses’s death at 120 was considered premature. Rather, in his case Biden has simply exhausted his once formidable talent and energy, and attempts to pretend that he’s a spring chicken have become a bad joke. People are dying because of this man.

I happen to believe Biden did the necessary thing in Afghanistan in the worst possible way (as does Tucker Carlson). The West should never have been there; proof of failure was the speed with which the state collapsed when we started to leave. It was not cheap (final price tag more than $2 trillion) or enlightened (grievances against the state included rape, corruption and torture), and if no US service personnel had died in 18 months, as claimed by war hawks, it’s probably because Trump had signed a peace deal with the Taliban. Biden is right: if he’d torn up that deal, it would have meant a shooting war.

But why did Biden reject a conditions-based approach to withdrawal? Why was Bagram air base abandoned? Why leave behind vital supplies and equipment? Why did he hide away in Camp David? Why ignore phone calls from the PM for around 36 hours? And why take so long to take questions from the press? The latter is unsurprising given that Biden waited three months into his presidency before he gave a formal press conference (the media might have hated Trump but he was far more accessible, and tweeted his opinions from 4am onwards), an embarrassing affair navigated with a cheat sheet.

The president lacks the necessary acuity for this job, something brushed away during the election as a symptom of his lifelong stutter, an explanation I bought into because I didn’t want to be cruel. But go and watch videos of Biden when he first ran for president in 1987 and you’ll note the stutter is almost undetectable. He also had less hair, much of which has magically grown back. The president is ageing backwards. By the time he leaves the White House, he’ll probably look 18.

What we’ve seen in the last two weeks are the consequences of the Democratic Party’s cynical bargain in 2020. In a desperate bid to beat Trump, they nominated the least offensive candidate possible – either because they have no faith in the appeal of their own ideology or the alternatives were so unlikeable – and though the strategy paid off in the short term, it meant that when they needed transformative generational leadership, they merely added one more placeholder to the gerontocratic pantheon.

The president is 78. The Senate Majority leader is 70. The House Speaker is 81. A striking element of this uncharismatic administration is that it’s hard to name off the top of one’s head anyone working in it – there is no Rahm Emanuel or James Carville – and its freshest face is Kamala Harris whose own ratings are down after she admitted in an interview that despite being in charge of fixing the migration crisis she hadn’t yet been to the border. “I haven’t been to Europe either,” she joked, to everyone’s confusion. Before the weekend, Harris boarded a plane for a tour that includes Vietnam. Kabul is such an embarrassment that Democrats are fleeing to Saigon to escape it.

Growing numbers of Republicans say Biden looked unwell or unfit for the job. It’s an open goal screaming for a good kick. Accusations that Ronald Reagan was over the hill were accentuated by innuendo; this man’s incompetence is displayed before our very eyes.

The Democrats will deny it, of course, partly because they suspect that if they are forced to admit that this candidate was a terrible mistake, then they would have nothing else to offer – and their pitch that “at least we’re a safe pair of hands” is false because the old establishment, the Democrats and Republicans who intervened and surged in Afghanistan, are just not that competent. It was they who committed America to building a foreign democracy in the midst of a civil war – a tall order for a nation that can’t even free Britney Spears.

You know what was one of the most radical, commented-upon aspects of Trump’s administration? He was the first president in memory not to have a dog. Biden turned up at the White House with two German Shepherds, as if to hammer home the point. Within weeks, one of the dogs had bitten a member of staff. The return to normalcy has been a return to chaos.

Posted by William McGowan at 11:01 AM