Dark Shadows Over 'The Light Onto Nations:' Israel's Fascist Turn 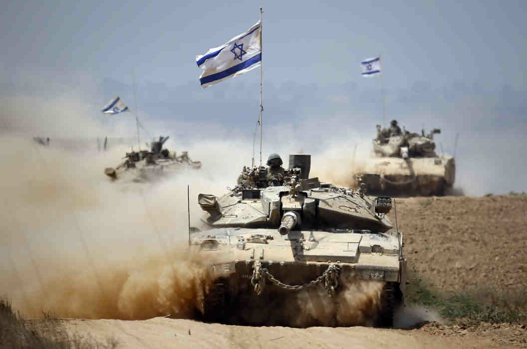 Images of belching, snorting tanks in Gaza, as well as the triumphalist rhetoric of Israeli politicians perched figuratively on top of them, are not new things. In fact, you could say they’re wired into Israel’s DNA. The Zionist militant Vladimir Jabotinsky wrote in 1923 that Zionists needed to erect a great “iron wall” of military supremacy to nurture the nascent Jewish state against the uncompromising opposition of the native Arabs. Spurning those with a softer vision of Jewish national redemption, while also dissing Christianity, Jabotinky declared that

According to John Judis’s Genesis, Jabotinsky did not consider himself a fascist, though he did praise Mussolini and saw democracy as a means to achieving a Jewish state, but not as an end in itself.  Judis explains that some of Jabotinsky’s followers however were “less reticent about fascist ides and methods.” Judis relates how Abba Ahimer, who replaced Jabotinsky as the leader of the Revisionsit Zionist faction, referred to him as  “Duce” and wrote a series of newspaper articles called “From the Dairy of a Fascist.” Ahimer extolled the 20th century as “the century of dictatorship, enthusiasm and the cult of the fist that was formed amid the fumes of tanks.”

Jabotinsky the Zionist Revisionist has himself become the object of revisionism. Hillel Halkin’s recent biography of Jabotinsky, which the Wall Street Journal assigned to Douglas Feith for review in a striking example of the pro Israel insularity now plaguing the paper’s editorial page, explains that Jabotinsky’s martial side is exaggerated, and that David Ben Gurion slandered him by calling him “Vladimir Hitler.” Jabotoinksy was essentially a literary figure, committed to a revival of the Hebrew language and culture, Feith contends, preferring “Jabotinsky's multifaceted nature as a littérateur and polemicist.” The book was also noted in Tablet, along similar ideological lines.

But Jabotinsky’s authoritarian legacy endures in the fury with which the Likud government of Benjamin Netanyahu let loose the Israel Defense Forces on Gaza, which looks likely to result in serious war crimes being leveled against the Jewish state. Perhaps even more noteworthy are a number of anti democratic tendencies building within an increasingly right-leaning and religiously conservative Israel. The “cult of the fist” lives on.

With a PhD in modern European history, the American Conservative’s founding editor Scott McConnell takes pains to differentiate exactly what form of authoritarianism is emerging in what its more ardent supporters call “the Middle East’s only democracy.”  In an essay posted last week called “What Gaza Revealed” McConnell says that there’s a need “to avoid crude polemical comparisons to Nazi Germany, particularly Nazism during the Holocaust era.” Such comparisons “are often meant to be gratuitously offensive. Israel is not Nazi Germany.” Nevertheless, McConnell writes

With its most recent Gaza war the country has turned a page, exposing Americans and the world to a new and far more fascist Israel than was evident in past decade.

The Israeli peace camp that energized mass demonstrations against Israel’s military misadventurism in Lebanon in the 1980s has “has nearly disappeared” McConnnell writes, adding “it is no longer safe in Israel to oppose government policy by peaceful demonstration.” In fact, the country as a whole is having trouble passing what former Soviet dissident Natan Sharansky, who went on to become a man of the Israeli right, calls “the town square test,” which says the distinction between a “fear society” and a “free society” depends on whether someone can “walk into the middle of the town square and express his or her views without fear of arrest, imprisonment, or physical harm.”  Referencing incidents that have not gotten the attention in the American press that they deserve, McConnell says:

To protest Israeli bombardment of Gaza now is to risk attack by right-wing thugs, while the police look on [1] or sometimes help the pro-government attackers [2]. Meanwhile, Israeli pro-government politicians look for new ways [3] to punish dissenters, either by rendering human right organizations unable to function or by pressuring employers to fire dissenters from their jobs—tactics now described as “white fascism”. Israel hasn’t traversed the entire route of becoming a Sharansky “fear society,” but it is on that trajectory.

(I might add several things to this list, subsequent to McConnell's post. This includes the Israeli government's refusal this week to let Human Rights Watch and Amnesty International into Gaza in order to obstruct war crimes investigations. Also, the protest that Jewish extremists mounted at the Tel Aviv wedding of a Jewish woman to an Arab man holding signs that said "Death to Arabs," as their leader, a former Knesset member, declared that the interfaith nuptial was "worse than what Hitler did.")

McConnell adds to his brief with a note on the ugly, racist and incendiary rhetoric of Israel’s right wing politicians, some of whom, I would add, are well received by the American pro Israel community, including prominent figures in the Republican party.

There is Ayelet Shaked,  [4]whose open call for genocide against Palestinians provoked one British-Israeli citizen to contemplate burning her Israeli passport. Shaked was giving political voice to the Israeli mobs that run around Jerusalem shouting “Death to the Arabs” and looking for Palestinians to beat up, though she is after all only one member of Israel’s Parliament. But what is one to make of Moshe Feiglin, not a marginal Israeli figure but deputy speaker of the Knesset, a top player in Israel’s ruling Likud Party? He recently called [5] for Gazans to resettled in concentration camps, and all of Hamas and its supporters to be “annihilated.” All societies have their hate groups and extremists, but nowhere in the democratic world are they nearer to the center of power than Israel. In the 1980s Meir Kahane had a small following in Israel, but his pro-ethnic cleansing party was made illegal. Now Kahanists are in the center of the country’s ruling ideology.

This now is Israel, a country whose military relishes unfair fights against poorly armed militias, where imposing collective punishment of innocents is the main point, whose elected politicians pine openly for concentration camps and genocide.

McConnell makes the point that the Israeli “turn to fascism” was explored in Max Blumenthal’s book, Goliath, which was loathed and dismissed by “the lobby” without ever being answered effectively. But “Gaza has brought Blumenthal’s ideas to a point, releasing the pent-up animus and anti-democratic hatred for all the world to see.”

McConnell explores the issue of psychological resistance---how difficult it often is for people to really see and recognize these kinds of political transformations in real time, as they live them. Historically in Europe, he explains, there was “a time lag” between the reality of Germany “becoming a murderous dictatorship, and the perception of that reality,” which cost many people their lives by not reading the writing on the wall and getting out in time.

Because Israel (like the Germany of early last century) is a country of advanced science and medicine, a country containing hundreds of thousands of individuals who would be perceived as exemplary anywhere in the world, there is a kind of cognitive dissonance: we draw back from recognizing the polity before our eyes because it doesn’t match  the image of Israel we grew up with (however idealized and unrealistic that may have been). But yes, Feiglin and Shaked represent the real Israel of today.

He senses that American opinion on Israel is starting to shift.

Perception of the new reality lags is beginning, ever so slowly, to catch up. Even in conversations with well-heeled members of the business establishment, one also can sense a sea change—one hears murmurs of disapproval, even outrage, expressed in places (an upscale golf club) where one would never before have heard it. Politicians are the last to reflect this: the Senate passed a unanimous vote of approval for Israel early in the conflict, and the House adjourned leaving all manner of pressing business undone, but making sure, by a 395 to 8 vote, that Israel received more funding for its Iron Dome.  … The American polity will change, probably bit by bit for a while and then in a big rush—as a result of political leadership. The evolution of public opinion towards gay marriage seems a plausible template.

I’m actually dubious that American opinion on Israel will undergo a shift any time soon like the one on a domestic issue like gay marriage, particularly as the pro Israel community here and hawkish politicians in Israel invoke the specter of ISIS and its jihadist fervor as an pretext to void the question of Palestinian statehood. And as politicians like Hillary Clinton, New York Governor Andrew Cuomo and US congressman Steve Israel, to name but a few, either run to Israel or give supportive interviews to pander to pro Israel money and pro Israel votes, I’m not exactly seeing the “leadership” that McConnel says will move public opinion.

Whether opinion shifts and whether that shifted opinion has any material impact on the nature of the “special relationship,” McConnell is right though when he says that America is facing “the terribly difficult problem” of

how to treat Israel, hyper-nationalistic, loaded with nuclear weapons, deeply racist, persuaded that any opposition to it is derived from anti-Semitism, feeling that the Holocaust gives it license to do whatever it wants and that the normal rules of international conduct will never apply to it. It won’t be an easy matter to solve.

As Thomas Friedman wrote this spring, “We’re not dealing anymore with your grandfather’s Israel.” Written just after as the violence in Gaza had crested, McConnell’s grim picture of contemporary Israel may be a bit overwrought. But right now Israel is throwing off the kind of dark shadows that make “The Light Onto Nations” look more like a fading star.