Nobody Expected This Of The Spanish Inquisition: Israeli Sephardics Now Eligible For 'Restored' Spanish Citizenship While Israel Thinks About Welcoming 'Conversos' In Reverso 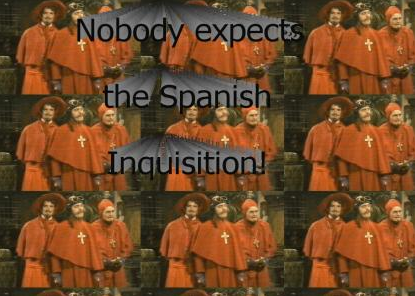 "Nobody expects the Spanish Inquisition," Monty Python used to say. So it was with an apt sense of surprise that I read in the Times that “the government of Spain would offer citizenship to Sephardic Jews as a gesture of conciliation for Spain’s expulsion of Jews during the Inquisition.” The Times reports that the initiative has "set off a flurry of interest in Israel."  The paper goes on:

Under the draft bill, Spain would offer citizenship to anyone, Jewish or not, whose Sephardic origins can be certified. The bill would also remove some existing requirements that include the need for applicants to renounce their current citizenship.

One potential Israeli beneficiary told a Times reporter "that to return to Spain more than 500 years later with a Spanish passport would be 'a victory' for his family and the Jewish people."

Although many applicants are interested in Spanish citizenship for sentimental and family reasons, some Israelis are eager to open businesses in Spain, despite the country’s economic problems and record unemployment, said Ms. Weiss-Tamir, (an Israeli immigration lawyer.) Spanish nationality would also grant holders the right to work in any European Union nation.

“The Israeli spirit is always looking for opportunities,” Ms. Weiss-Tamir said. “People want to move around Europe more easily, or to be able to work.”

The Times also noted that:

A delegation of top American Jewish leaders was visiting Spain last week for high-level meetings, including with King Juan Carlos. Malcolm Hoenlein, executive vice chairman of the Conference of Presidents of Major American Jewish Organizations, said in a statement that Spain’s citizenship bill would “help assure that the history of the violence and exile will never be forgotten.”

Extending citizenship to Israeli Sephardics might boost the number of Israelis leaving Israel for greener pastures, however, a worrying trend for the Israeli government. Although the number of people who have contacted the Spanish Ministry of Justice is estimated at only 3000, the number is expected to increase. According to the Forward, 100,000 Israelis have applied for and received German passports; many more Israelis are leaving Israel for other countries for a variety of reasons, economic opportunity and security being some of them, as well as the rightward, religious drift of the country and the toxic relationship with Palestinians.

In what appeared to be a reciprocal gesture, Natan Sharansky, chairman of the quasi-governmental Jewish Agency for Israel, estimated that there were millions of descendants worldwide of “conversos,” Jews who converted to Catholicism under duress in medieval Spain, including hundreds of thousands who were exploring ways of returning to their Jewish roots.

“The state of Israel must ease the way for their return,” Mr. Sharansky said.

So in other words, you might lose some, but you could also win some---many more in fact.

I wonder though how Spain—and Israel---will certify claims to Jewish roots dating back over 500 years. The Times mentions that some potential applicants were from families who had “books or documents tracing and proving their ancestry.” One prospect told the Times that

When his own grandmother and great-grandmother left Izmir, Turkey, for Argentina, they were issued an identity document signed by Jewish community leaders and certified by the Spanish consul there at the time.

This is age of genetic testing though, and it might not be long before it gets introduced into the mix here. Last year the Times of Israel reported that the office of Prime Minister Benjamin Netanyahu had advised that some Russians hoping to immigrate from the former Soviet Union “could be subjected to DNA testing to prove their Jewishness.“

Genetic testing is a vibrant industry in Israel. Too bad Monty Python isn’t available to connect the ironic historical dots on this one. To an American sensibility, the idea of citizenship being based on having the right genes and bloodlines is hardly an affirmation of the “shared values” at the core of the US-Israeli “special relationship.”

Posted by William McGowan at 12:55 PM