Annotated Quote Of The Day #2: In Defending Gaza Slaughter, Israeli Diplomat Daniel Ayalon Tells Wolf Blitzer That if 'Proportionality' Mattered, 'The Nazis Would Still Be In Power' 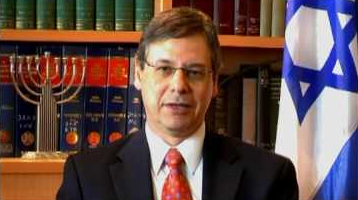 Daniel Ayalon, a former Israeli Ambassador to the US and former Israeli Deputy Foreign Minister, on CNN at around 2:30 pm EST today in response to Wolf Blitzer’s question about Israel’s disproportionate response in Gaza, and the mounting toll of civilian casualties.

Must have been a Freudian slip.

Ayalon also made sure to blame the Palestinians for the failure of the recent round of peace talks, alluding to their refusal to recognize Israel as "The Jewish State," which many analysts regarded as a late-in-the-game "poison pill" designed to void any discussion of the Palestinian Right of Return. Ayalon implied that in refusing to recognize Israel as a "Jewish State" they were ignoring that "Judaism is not just a religion. It’s a culture, it’s a history, it’s values.”
Posted by William McGowan at 3:30 PM