Nepotism Watch: At NBC News, Having Fancy Parents Brings In The Big Bucks But Corrupts The Journalism 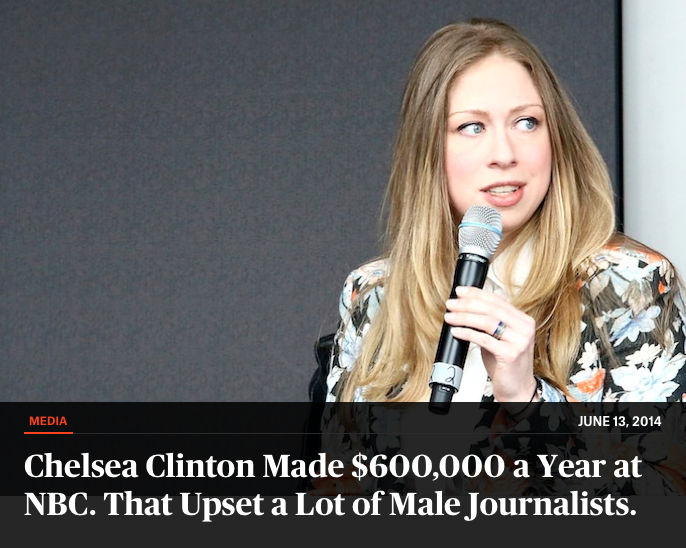 The New Republic and Politico yesterday on media nepotism at the Peacock Network, in the form of Chelsea Clinton, who was paid $600K a year as a Special Correspondent before switching to a month-to- month contract. The TNR piece uses this as a vehicle to discuss gender inequity in the media, which became a hot topic in the wake of the New York Times' firing of Jill Abramson, despite Abramson having little proof that she was in fact, underpaid.

TNR sees Clinton's the exorbitant salary as a way of correcting gender imbalance in newsroom paychecks, glossing over the fact that she is 34 years old and had no professional  experience in journalism before she was hired by NBC News President Steve Capus in 2011.  I see the much more important problem of media nepotism, which along with ethnic insularity, as described in my recent post on David Gregory's plummeting ratings, is a major source of lame journalism and audience alientation. TNR says Twitter lit up with salty retorts. Glenn Greenwald's Meet The Press fantasy roundtable was my fave, with Greenwald imagining Chelsea Clinton being joined with other NBC News nepotistas.

Which turned out to be not that far fetched on Father’s Day this Sunday as MTP’s David  Gregory brought on Luke Russert, son of Gregory’s predecessor, the late Tim Russert, who had hosted MTP for 17 years before his untimely death in 2008. Luke Russert was now an NBC correspondent covering Congress, Gregory explained, and had just written a new preface to the 1998 bestseller Tim Russert had written about his own father, Big Russ and Me, to coincide with the tenth anniversary of its publication.  The fawning exchange, full of saccharine banalities and nostalgia, might have been something that Tim Russert himself would have found inappropriate. Just as Russert, a bootstraps kind of guy, might have found it inappropriate for NBC to have hired Luke to cover the 2008 elections shortly after Russert himself died, Luke having just graduated from Boston College with little to no experience in broadcast journalism other than what he may have picked up visiting Dad at work or absorbing it at home.

At a time when American news organizations are rightfully, if belatedly, examining the self-dealing of American elites, as seen in countless stories about the "One Percent," how these very same news organizations can justify favoritism for the kids of this self-dealing elite is a story in and of itself--- a story Russert might have very well examined himself. It's not just about inherited privilege at a time of increasing class stratification, shrinking opportunities and the corruption of the ideal of meritocracy. It's about wasting scant newsroom dollars to pay inexperienced media brats far more than they are worth for journalism that is often insular and out of touch. Two of America's most pressing problems are social distance and a lack of social trust, especially between the elite and the middle. Media nepotism, the product of the cult of celebrity and of "corporate branding," only makes it more difficult to bring those two problems into focus and do something about them. 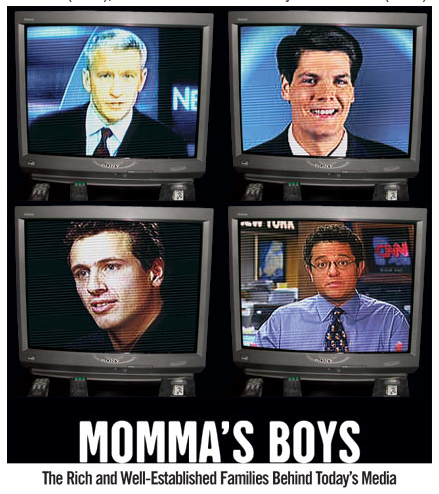 While the story of high end media nepotism may have reached the point of parody, it’s not entirely a new one. In 2003 I examined the phenomenon in VICE magazine and on National Review Online, explaining how (and please forgive me for quoting myself)

the sons and daughters of media biggies — as well as the children of their “cafe society” friends — have achieved a small but critical mass in many news organizations.” Call them “media legacies”--- analogous to the “alumni legacies” which have figured recently into the debate over affirmative action and university admissions.

Judging from the television coverage of the height of the US fighting in Iraq, which is when I was writing, "You could have asked whether network executives in charge of on-air talent might be using Vanity Fair as a recruitment tool."

On CNN there’s Andrea Koppel, daughter of Ted and Benno Schmidt, son of the former president of Yale. CNN also boasts anchorman Anderson Cooper, son of Gloria Vanderbilt — as well as Jeffrey Toobin, whose mother, Marlene Sanders, was one of the first women to make it at CBS News as a correspondent and whose father, Jerry Toobin, was at NBC for many years.

Over at ABC, there’s Chris Cuomo; NBC has John Seigenthaler, whose father John Sr. was for decades editor of the influential Nashville Tenessean. Even the populist Fox has its prince — Douglas Kennedy, son of RFK. And let’s not overlook the news division of MTV either, with the fair and fond Serena Altschul, daughter of the Social Register Altschuls, and who was also a regular guest on MSNBC’s Donahue until its plug was pulled.

For news executives, being nice to prominent sons and daughters can enhance one’s social life and status — always a plus in status-conscious Manhattan, where dinner-party invitations, private-school admissions, and co-op approvals all often depend on help from on high. Besides, how could an industry increasingly obsessed with celebrity not be swayed by the names of the well-born and tony?

But when it came to credibility in reporting and analysis of class issues in America, however, which have only grown more acute post recession, “the “legacy” trend did not augur well, “weakening an all-important journalistic understanding for the emotional, social, and economic bearings of average people in day-to-day life.”

Class has long been a press weakness, and represents one of its most significant blind spots — encouraging socio-economic obliviousness in some places and socio- economic sentimentality in others. For all the talk about media diversity, class is still given short shrift.

The faces and names associated with “media legacies” inevitably help reinforce the widely-held impression of a journalistic elite that is increasingly out of touch with its mainstream audience and readership. It also necessarily affects coverage and analysis of a broad array of social issues in which class is either the primary focus or the subtext.

Famed CBS newsman Edward R. Murrow said that when he had a really complicated story to report, he would think of his boyhood friends in the midwest, and simply tell the story as he would have told it to them. I’d be open to being told I’m wrong here, but somehow I suspect that those raised in the posh confines of the Dakota — and those who were their regular guests — would have trouble claiming Murrow’s lasting journalistic north star.
Posted by William McGowan at 9:43 AM