Why CNN Should Not Have Hired Michael Oren: Former Israeli Ambassador---Who Is Also A Former American---Scores Way Too High On Colbert's 'Truthiness' Test 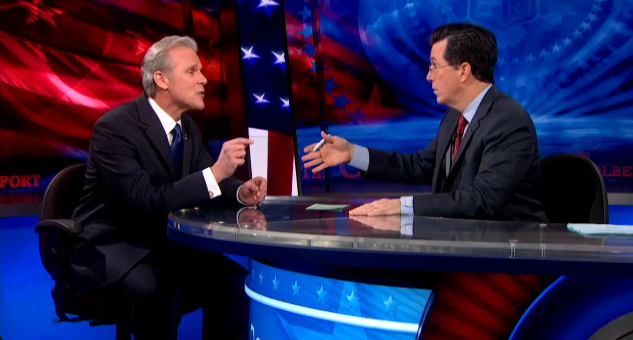 If a picture is worth a thousand words, sometimes a comedy sketch can be worth ten thousand. This was certainly the case a year ago last February, when Saturday Night Live satirized Chuck Hagel’s confirmation hearing as Secretary of Defense before the Senate Armed Services Committee. (I'd link to it, but NBC Universal has now blocked it on copyright grounds, says the Atlantic.) The skit, which was attacked as anti Semitic by professional anti-anti-Semites like Abe Foxman of the Anti Defamation League, brilliantly captured the political hypocrisy and the “Through the Looking Glass” surrealism of Hagel’s inquisitors as they tortured him for daring to acknowledge the role that the Israel lobby plays in American politics and for Hagel’s alleged lukewarm support for the Jewish State.

The Hagel affair opened my eyes to the disturbing extent to which the American-Israel "special relationship" had grown into what might be more properly called "an alliance too far." It also brought into focus how much and how long the debate on that relationship has been constrained by the ideological orthodoxy and taboos enforced by the pro-Israel community--- and by journalists and journalistic organizations anxious about offending it. Which made the comedic candor in the SNL skit so refreshing--and why even as it underscored the strength of pro Israel orthodoxy, the Hagel episode also might have signaled its weakening, largely out of popular disgust at something so McCarthy-esque and unAmerican. Americans don't like bullies, and they particularly dislike politicians who bully and demagogue on behalf of a domestic lobby that is putting the interests of another country above the interests of its own--and above the interests of common American decency.

Last week, the Jerusalem Post reported that CNN will be hiring former Israeli ambassador Michael Oren as an on-air news analyst and contributor. Born in upstate New York as Michael Bornstein, Oren was raised in suburban New Jersey and schooled at Columbia before moving to Israel and taking a Hebrew name. He was a longtime member of the Israeli Defense Forces and had been living in Israel for most of the last three decades but  formally renounced his American citizenship to take the ambassador's job in 2009 at the request of Israeli Prime Minister Bibi Netanyahu. Oren is one of at least three Americans in recent years who've given up their US citizenship to become Israel's American envoy, following Dore Gold, Israeli envoy from 1997 to 1999, and the current Israeli envoy, Ron Dermer who took over from Oren. Signing the oath of renunciation was hard on Oren, the New York Times' Mark Landler poignantly and usefully noted. Oren told Landler that he "got through it with the help of friends from the American Embassy in Tel Aviv who 'stayed with me, and hugged me when it was over.'” (It's not clear from the story if Landler confirmed this tearful scene with US embassy staff but I'm dubious. Not sure why embassy staff have nothing better to do than hug a renunciate.)

Not sure either why the J Post announced the Oren hire and not CCN itself, but the record shows that Oren

* has been an official Israeli apologist for what are credibly alleged to be Israeli war crimes--- in Lebanon in 2006 and in Gaza in 2008---war crimes that could be prosecuted if the US didn't use its UN veto to shield Israel.
* has near-delusional ideas on the “shared values” underpinning the US-Israeli “special relationship,” seeing Israel, as one of Oren's critics put it as a “tiny America”
* is in complete denial about Israeli government interference in American politics, as per Netanyahu’s efforts on behalf of Republican Mitt Romney in the 2012 presidential elections
* likes censorship just a little too much for someone who will be working in a news organization dedicated to free speech, condemning the Goldstone Report on Israeli war crimes during its 2008 Gaza offensive as worse than Holocaust denial and threats from Iran, and calling for US Congressional action against the American Studies Association's academic boycott against Israel on grounds that the boycott discriminates against Jews.
* has at certain points lied outright in the most transparent ways in the service of his current country and at many, many other points lied only slightly less transparently so by omission.
* embraces the ludicrously outdated official Israeli government taboo on acknowledging or discussing Israeli nuclear weapons, which makes candid and complete analysis of the crisis over Iran’s nuclear weapons fairly hard to do, given that Israel’s nuclear monopoly is very much a factor in Tehran’s nuclear ambition.
* has been in the forefront of Israeli efforts to enlist the US into a war with Iran that he will now be well-compensated to analyze on the air.

For now though, have a look at Oren’s March 2013 appearance on The Colbert Report.  My favorite part is when Oren doesn't seem quite sure if he's from Washington or from Israel (shades of the dual loyalty canard?) and when Colbert says that Oren should make sure that Netanyahu knows that "if you do bomb Iran we are right behind you with just as many nuclear weapons as you admit to having.”

As the Daily Beast’s Emily Hauser has written, Michael Oren

has clearly chosen to take on the teachings of America’s most humble pundit and thoroughly embody the Colbert Creed of Truthiness: truth that’s from the gut, not books! Truth that (if I may quote the American Dialect Society of January 2006) reflects "the quality of preferring concepts or facts one wishes to be true, rather than concepts or facts known to be true"!

Hauser did tweak Colbert just a bit for letting Oren off the hook when he said the Israelis were doing everything they could to “get the Palestinians back to the negotiating table," zeroing in on the lying -by-omission that is trademark hasbara---both in Israel and in Zionist circles here.

Like the finest jazz, the beauty was in the notes that Oren didn’t play: The Israeli leaders under whom Oren has served these last several years have done virtually everything they can—from massive settlement construction, to incursions into what is ostensibly Palestinian-controlled territory, to all-out war, to vague threats of bringing down the Palestinian government—to ensure that such negotiations will be impossible to resume. Good will, schmood will! If we keep those Palestinians just angry and insecure enough (my Israeli government seems to think), they’ll never want to talk to us again! VICTORY!

Posted by William McGowan at 1:36 PM