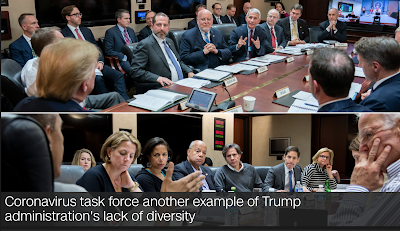 CNN national political writer Brandon Tensley has a very impressive resume: An advanced degree from Oxford and jobs with the New America Foundation and the ultra-progressive Center for American Progress. Tensely covers culture and politics from CNN's Washington bureau, usually in the woke activist fashion of all- too-many POC millennials.

I’ve been writing about the corrupting effects that the crusade for diversity has had on American journalism for more than 25 years now, with as much intellectual honesty and neutral professionalism as I can muster. Rarely have I seen anything as utterly stupid and ideologically programmatic as Tensely’s latest effort: Coronavirus task force another example of Trump administration's lack of diversity. Have a read:

It's a statement that's as predictable as it is infuriating: President Donald Trump's administration lacks diversity.

On Tuesday, Trump tweeted photos of a briefing he'd received on the new coronavirus spreading out of China. "We will continue to monitor the ongoing developments," the President said in his post. "We have the best experts anywhere in the world, and they are on top of it 24/7!"

Who are these experts? They're largely the same sorts of white men (and a couple women on the sidelines) who've dominated the Trump administration from the very beginning.

By contrast, former President Barack Obama's circle of advisers in the face of the 2014 Ebola outbreak in West Africa was hardly so monochromatic. Neither was it so abysmal in terms of gender diversity. (Of course, to contextualize, Obama's administration, on the whole, was far more diverse than Trump's.)

And yet, as unsurprising as the diversity issue in the Trump era has become, it's still worth pointing out from time to time, especially as the country approaches the 2020 presidential election in earnest.

That's partly because the recent photos of "the best experts" telegraph the kinds of people the administration deems worthy of holding power -- and even being in close proximity to it.
They communicate a "patronage network that everyone is operating under," as Eric Yellin, an associate professor of history and American studies at the University of Richmond, told The Washington Post last year, about a different set of photos. "Having that network be interracial is really important."

But the visuals that have come to define the Trump administration say something else, too. They signal which people in a multi-racial, half-female country Trump values the opinions of: mostly white men who are mirror images of the President himself. 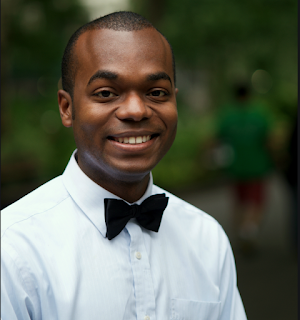 Posted by William McGowan at 8:49 AM