The Daily War Crime: UN Human Rights Chief Says Attacks On UN Facilities And Civs In Gaza Are Not "Accidental" 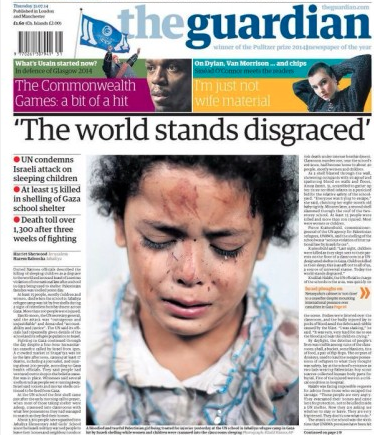 UN Human Rights Chief Navi Pillay on Israel's "deliberate defiance of obligations that international law imposes on Israel:”
For the past week I have been looking at the previous fact-finding missions. They’re all out there, the same kind of attacks occurring now on homes, schools, hospitals, UN premises.
None of this appears to me to be accidental. There have been clear warnings issued to Israel by these very eminent commissions of inquiry. Plus follow-up commissions of inquiry.
Therefore I would say they appear to be defying, deliberate defiance of obligations that international law imposes on Israel. We cannot allow impunity. We cannot allow this lack of accountability to go on.
Every legal system, every just system in each one of our countries is based on the principle that to avoid a recurrence of crime, you investigate, prosecute & punish. That has not happened here.

The Big Takeaway from Gaza is whether the US will withhold blanket diplomatic protections it historically has provided Israel at the UN. I read Pillay's statement as a plea for that NOT to happen, going forward. This sets a very difficult stage for US Ambassador to the UN, Samantha Power, who will be on the spot to stand up to Israel's extensive violations of human rights in this round of Israel's Gaza operations or to go along with the same game the US has been playing, which is essentially doing AIPAC's bidding. Her own personal "Problem From Hell."

Posted by William McGowan at 9:13 AM