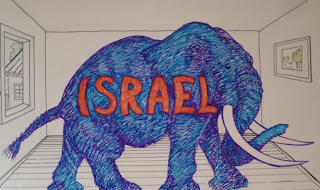 Freshman Congressional Representative Ilhan Omar (D-MN), who dared to say that the Israel Lobby is a major source of Congressional corruption has NOTHING to apologize for, except for her glib demeanor on twitter, the "Special Relationship" being a subject that requires much more space for nuance, fairness, concern for antisemitic misinterpretation and basic compassion. Tropes can be true: The Israel Lobby has been corrupting Congress for decades--- presidential politics only more recently, but no less thoroughly. Media-driven public scorn for saying exactly that publicly is making the discourse aboutt the "Special Relationship" dysfunctional, deranged and an avenue for McCarthy-istic bullying, or what passes for that in the pro-Israel community. Israel Debate cops, like Leon Wieseltier, Jeffrey Goldberg, Bret Stephens and the new darling of the Zio-chauvi crowd, Forward op-ed editor Batya Ungar-Sagron, should be more honest and less bullying, at least if they want to be considered journalists (instead of agents, paid or unpaid, of a foreign lobby, as some might have it. Or do they think no one actually notices, or that the only noticers are goyim so who cares?)

They should also worry that the marginalized status they want Omar to suffer might be their own fate someday, soon too. The worm does indeed turn. Just ask Leon.

I'm sorry but as someone who has written well and quite accurately about the politics of political correctness and ideological orthodoxy for a long time, I cannot turn away without noticing, out loud, what is being done in Congress, in the service of another "smelly little orthodoxy," as George Orwell might say. And in the service of a foreign government.

As an American, there is nothing antisemitic about "outing" the Israel Lobby--as well as those in the American Congress who are corrupted by it in scrambling for campaign cash every two years.
Posted by William McGowan at 6:16 PM