CNN News Flash: PC Reporters On The Jussie Smollett Racial Hoax Were 'Too Woke To Work' 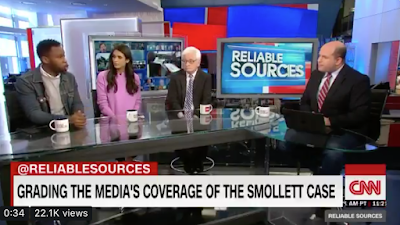 Speaking to CNN’s Brian Stelter on Sunday’s Reliable Sources, podcaster Kmele Foster noted that some in the media had doubts about Jussie Smollett’s story of being attacked for his race and his sexuality but were anxious about having their motives questions---ie were leery of challenging the victim narrative. Reporters who were in a position to probe obvious problems with Smollett’s version of events “were afraid to raise the questions because of the intersectional nature of the particular accusation.” In other words, he's black and gay so they'll be double the usual trouble if you bring the same level of skepticism to Smollett's accusation as you would to anyone else's.