Ali Watkins's Note To Self: Don't Sleep With The Elephants If You Want To Cover The Circus

Trapped in their digital cocoons and narrow-gauge news feeds, never answering their iPhones or their email, Millennials are pretty fairly described as bringing generational insularity to new and often irritating levels.
They also have a decidedly ahistorical worldview. Among many other things, this tends to encourage a cluelessness or indifference to the experience of prior generations as well as a casual, whatever attitude toward the rules, conventions and norms that governed social behavior and professional conduct among those that preceded them.

Not to be underestimated is their skill at convincing other generations that theirs is the way it should be. Former Los Angeles Times columnist Meghan Daum, age 47, thought that the anonymous “Shitty Media Men” blacklist that circulated among young females magazine editors in the early days of the #MeToo movement  was appalling. But she also thought that at some level “Maybe it’s time for for Gen Xers and baby boomers to step aside and let the younger generation sort out their own rules.”

Having carried on a three year sexual relationship with Richard Wolfe, a Senate Intelligence Committee staffer 30 years her senior, precocious 26 year old New York Times reporter Ali Watkins certainly can’t be accused on generational insularity.  But the affair with Wolfe definitely highlighted a casual attitude toward one of American journalism’s most important dictums: Don’t sleep with your sources, especially one up to his neck in the ongoing Russia collusion investigation which is fast coming a cropper. Two generations of newsroom feminists worked to establish this “sex with sources” taboo as the Ultimate Conflict Of Interest, largely as a way to fend against the misogynist trope of women using sex to get ahead but also as a way of avoiding the career blowback that often goes with the pillow talk. Men have to be careful these days, but if you could get female journalists to talk on condition of anonymity, I’ll bet a lot of them would call Ali Watkins a penultimate “Shitty Media Girl.”

The Wolfe-Watkins liaison came to light after Wolfe was indicted on three felony counts of lying to the FBI about his relationship with Watkins in the context of the Bureau’s efforts to investigate leaks from the Senate Intelligence Committee. According to reports, the government seized Watkins’s telephone and email metadata, though not the content of calls, texts or messages, in order to make the determination that Wolfe was lying to them about his relationship with Wolfe and was, perhas, the source of the leaked information that had made its way into numerous, high-profile scoops Watkins had had over the years. To be sure, there was a question about government overreach; Department of Justice rules put a pretty heavy burden on the government to prove that they need to seize a reporter’s telephone and internet records in order to advance an investigation inot unauthorized disclosure of sensitive or classified information.

Yet it was striking how many media organizations, including the ones that Watkins had worked for in her rapid rise to the top such as the Huffington Post, Politico, Buzzfeed and theNew York Times, let the question of government overreach overshadow any consideration of Watkins’s lapse in journalistic ethics, as well as the lapse on the part of her bosses who seemed to have known about the relationship. In fact the government’s seizure of Watkins’s records and Watkins’s unethical journalistic behavior bothrepresent serious abuses of power and privilege.

According to reports, Watkins’s bosses at several of the places she worked actually knew about the relationship.  Ben Smith at Buzzfeed would not confirm he know when he hired Watkins in 2015 or found out after, but some of his masthead subordinates have admitted they knew. Still, Smith chose to condemn the FBI investigation, calling it an “unjustified leak hunt” while declaring that the wording of the indictment, in naming Watkins, represented “a disgusting smear of a reporter.” Smith tweeted: "We are deeply troubled by what looks like a case of law enforcement interfering with a reporter's constitutional right to gather information about her own government.” The New York Times tried the same tactic but ended up having to announce that it had put Watkins and her work under investigation, noting that she was going on a previously planned vacation.

New York Post columnist Michael Goodwin got to the core of the journalistic train wreck that is the Ali Watkins –James Wolfe scandal, which, on the journalistic side, still could blow up into something even more embarrassing and significant for the Timesthan the Jayson Blair plagiarism and diversity fiasco of 2003. While Goodwin’s column,New York Times Reporter Broke the Biggest Rule in Journalismdoesn’t ignore the issue of government overreach involved in seizing a reporter’s phone and email records to hunt down problematic leaks, he does so without using that to dodge the deeply dubious professional and personal ethics of the reporter. Recounting a newsroom legend that actually happened, Goodwin describes how storied NYT editor Abe Rosenthal once handled a similar incident. Rosenthal claims Goodwin, would have known what to do and “would have done it already.” Writes Goodwin, in full:

On previous occasions, I’ve written about the blunt way legendary New York Times editor Abe Rosenthal dealt with a conflict of interest. The story bears repeating after the indictment of a top Senate official over his contacts with reporters, including one from the Times with whom he had a romantic relationship.
The Rosenthal standard on conflicts was shaped by a remarkably similar case decades ago. Soon after a woman who had covered politics in Philadelphia was hired by the Times, a story from Philly said she had a secret affair with a politician she covered and accepted expensive gifts from him.
Rosenthal asked the woman if the story was true and, when she replied yes, immediately told her to clean out her desk and said she would never again work for the paper.
Word of the incident spread quickly through the newsroom, and several female reporters complained to Rosenthal. They argued that the woman was treated unfairlyand, at which point, Abe raised his finger for silence and said something to this effect: “I don’t care if you f–k an elephant on your personal time, but then you can’t cover the circus for the paper.”
The meeting was over, case closed. His point was not about private conduct. It was about the credibility of the paper. When the two conflict, the paper must come first.
That lesson came rushing back to me as I read about the case involving James Wolfe, the longtime security director of the Senate Intelligence Committee. Federal prosecutors charged Wolfe with three counts of lying to investigators about his contacts with reporters, one of whom is Ali Watkins, who covers federal law enforcement for the Times.
The feds allege that Wolfe used encrypted phone apps and other tools to leak secret information. One article cited was written by Watkins on April 3, 2017, when she worked for BuzzFeed, and involved Carter Page. Part of the orgy of leaks targeting President Trump, the article says Page “met with and passed documents to a Russian intelligence operative” in 2013.
As part of the probe into Wolfe, the government seized e-mail and phone records belonging to Watkins, although it reportedly has not accessed the contents. Nonetheless, the Times and others reacted with outrage, saying the seizure threatens a free press.
“All leak investigations — whether they directly target reporters or not — are a grave threat to press freedom,” the Freedom of the Press Foundation said in a statement. “Whistleblowers are the lifeblood of reporting, and the Trump administration is directly attacking journalists’ rights by bringing these cases.”
I agree that any government action that chills free expression is worrisome, but the First Amendment is not a license to break the law. As such, the foundation’s condemnation is so wrong-headed that it serves only to undercut support for media freedom.
Its absolutism about the “grave threat” of all leak investigations is ridiculous and, if that were the law, it would be impossible for America to keep any secrets.
Moreover, the suggestion that Wolfe was a whistleblower is not based on known facts. There is, however, strong evidence that he was leaking secured information to reporters, including his lover, - although he is charged so far only with lying.
While many details remain unknown, it is already clear that Watkins’ highly unethical conduct presents a problem for press defenders. Hers is not the hill they should volunteer to die on. Start with the fact that Watkins admits she was sleeping with Wolfe when she covered his Senate panel for BuzzFeed and Politico.
Although sexual relationships with sources are taboo at most large news organizations, editors at BuzzFeed and Politico said they knew about Watkins’ relationship with Wolfe, but allowed her to continue covering the panel.
The admission is shocking yet not surprising given the collapse of journalism standards in the age of Trump. Pure hatred of this president in newsrooms across America is blinding editors and reporters to basic fairness and glaring conflicts of interest.
Public trust in the media is at an all-time low, and this case illustrates a seedy link between the Washington press corps and the Washington swamp.
The Times says Watkins informed editors of the romance when she joined the paper in December of 2017, but she claimed Wolfe never gave her classified information and said the relationship had ended.
Yet whether Wolfe gave her classified information or merely routine secrets shouldn’t matter. The point is that her secret relationship with a source created a serious conflict of interest in her coverage.
Another ethics problem is that the Times reports that the paper learned only Thursday that the Justice Department had notified Watkins last February that it seized her phone and e-mail records.
Her decision to withhold that critical fact from editors should weigh heavily against her. It also should temper the outrage of her defenders, given that she wasn’t alarmed enough to disclose the seizure and continued to write about the Trump administration while hiding her role in a criminal investigation.
Indeed, other journalists are highlighting tweets Watkins wrote last year saying the Senate intel panel suspected the White House of leaks. That raises the possibility she was spreading disinformation to protect Wolfe from suspicion.
So far, the Times says it won’t fire her, reflecting how deeply it is caught in a web of its own making. As more facts emerge, will it continue to excuse Watkins’ behavior because of its own anti-Trump bias, or will it measure her against its traditional standards of professional integrity?
I know what Abe Rosenthal would do. In fact, he would have done it already. 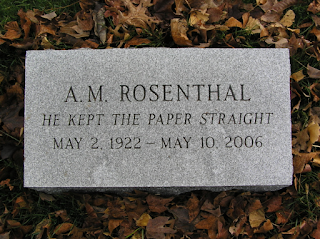 Posted by William McGowan at 10:32 AM