Only Man Is Vile: What Sri Lanka's Bloody Ethnic Conflict Can Teach America About Identity Politics And Multicultural Failure 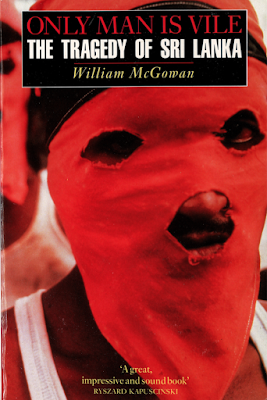 p. 8: As compelling as it was to use Sri Lanka's fall from grace to understand the problems of many former Third World colonies, I was just as drawn to the situation there by what it said to the West. Obviously, Sri Lanka's predicament underscored its inability to build a multiethnic, multicultural society based on equity and respect for principles of secular pluralism. This was something that states in the West might take note of, I thought, as these societies became more ethnically diverse and less certain about their essential cultural identities.

Ironically, though, Sri Lanka failed to build a stable multiethnic, multicultural society because it embraced many of the very concepts and ideas that multiculturalists in the West have advocated. These included preferential policies for ethnic groups deemed historically oppressed; reform of the school curriculum to redeem outdated cultural hegemony and promote ethnic self- awareness; economic policies that stressed ethnic entitlement instead of merit, efficiency, or economic expansion; linguistic nationalism indulged at the expense of a common tongue; and other ideas shaped by a romantic infatuation with the idea of distinct cultural identities based on invidious scholarship and demagoguery. Sri Lanka, with its own discrete historical and cultural context, was a remote war-torn country in the underdeveloped world that many of my own contemporaries couldn't find on a map. But its experience cast shadows toward the more stable and affluent Western countries which those countries ignored at the risk of their own political and cultural fragmentation.

Only Man Is Vile is one of the best books ever written on nationalistic, racial and religious conflict... A great, impressive and sound book.
---Ryszard Kapuscinski, The Emperor, Shah of Shahs, Another Day Of Life


An excellent book.
—The Economist


Posted by William McGowan at 2:00 PM