If Netanyahu Does Speak To Congress, Maybe Pat Buchanan Should Have A Say-So Too 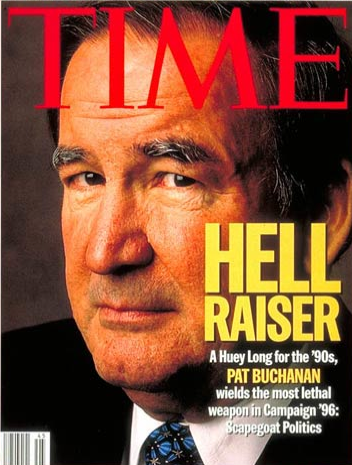 Jim Fallows at the Atlantic says we should listen to what Netanyahu has to say to Congress in rebuttal to Obama on Iran. According to Fallows we should pay especially close attention to Netanyahu's core claim that the challenges of a nuclear Iran today hark back to the challenge of Nazism that the world shrank from in 1938. Fallows:


Let's listen; let's set aside, if we can, the unprecedented and insulting nature of his appearance before Congress; and then let's think carefully about American national interests, which no foreign leader can define. I believe they're very different from what Netanyahu is advocating.

If so, I have a modest proposal: Let Patrick Buchanan give the surrebuttal, as such a rebuttal-to-the rebuttal is known in debate club argot.

Buchanan has been a pariah in certain circles ever since he referred to Congress as “Israeli occupied territory” on a 1991 broadcast of the McLaughlin Group when voicing opposition to the first Gulf War.

The remark was in line with other controversial bon mots Buchanan delivered around that time. Among them was a disparaging reference to the Israel Defense Forces' “amen corner” on Capitol Hill, as well as complaints about disporportinately low rates of Jewish-American military service, which would mean that “kids with names like McAllister, Murphy, Gonzales, and Leroy Brown" would be bearing the brunt of any Middle East fighting. These hot words led to William F. Buckley’s infamous National Review article in which he said it was "impossible to defend" Buchanan from the charge of anti Semitism, although Buckley qualified it a bit by saying that it was probably Buchanan’s “iconoclastic temperament” that had driven him to say what he had said and not bigotry. Former NYT executive editor Abe Rosenthal went much further though, insisting that Buchanan’s remarks could pave the way for another Auschwitz.

This eventually led to Buchanan’s almost complete marginalization within the GOP. In the following years, pro Israel neoconservatives gained control and power, and often expressed their delight and domination over the "paleocons" (and even the "realists" like Bush 1 stalwart Brent Scowcroft) they had purged with a gloating triumphalism and arrogance---a kind of rhetorical frog-marching. The power grab that put neoconservatives in control of America's Israel policy will go down as Bill Kristol's legacy, as will the McCarthy-esque smearing, denunciation and demagoguery associated with that.

The prospect of Netanyahu speaking before a joint session of Congress to second-guess presidential strategy on Iran's nuclear development however seems to redeem some of Buchanan’s anathemas. It also seems to redeem that controversial cartoon that the Economist was forced to pull a little more than a year ago suggesting that Israel’s undue influence in Congress was limiting Obama's range of diplomatic options with Tehran. 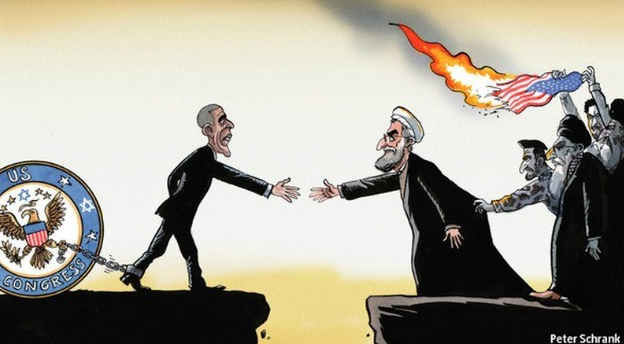 The speech, which will mark the third time that the Israeli Prime Minister will have addressed joint sessions of Congress, seems to represent a tipping point when the offensiveness of Buchanan's purported slur seems to pale before the offensiveness of the pro Israel overreach that is involved at this moment. It's an undeniable sign of the excess deference that Congress has long paid to Israel--and to its American Zionist supporters--- on both sides of the aisle. Which has led to an undesirable intermingling of our two very different political cultures--or at least the perception of that---as well as a confusion of what is expressly in America's national interest and what is in Israel's. In lobby-speak it’s called “capture,” which is a different thing from an "occupation" as in "Israeli-occupied territory" but not by much.
I'm  being somewhat facetious; don’t mean to let Buchanan completely off the hook. His utterances may not have been anti Semitic per se but they did come unfortunately too close to the “tropes” that are considered verboten in the American discourse on Israel and his use of them was probably counterproductive in terms of opening up public debate. But what happens when the truth and the trope converge, as they seem to be doing now? When the realities of foreign policy-making become indistinguishable from a cartoon?

As impious as he may have been, Buchanan said something that historical facts show was true enough back then and is even more true now. In light of the lobby's unseemly, even dangerous hold on Congress, as explored last summer by none other than the New Yorker, it's just very hard, maybe even "impossible," to defend Pat Buchanan from the charge of being prescient. What he identified in the early 1990s has grown into something too big to ignore, or to be bullied into denying.

Posted by William McGowan at 1:28 PM