On Gay Pride Weekend, How A Forgotten Case Of Homosexual Blackmail Changed the Course of Gay Civil Rights 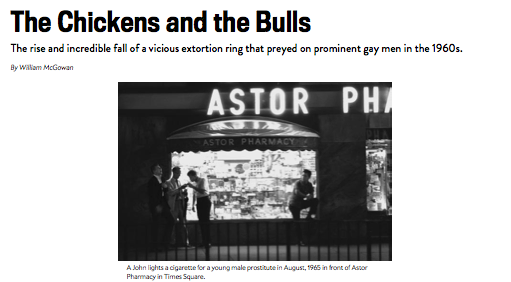 From Slate, a link to my exhaustively reported 2012 account of America's largest case of gay extortion, illustrated with some great Midnight Cowboy-style photographs. Hollywood sees a noirish period thriller much like L.A. Confidential, depicting a hinge moment in the history of gay civil rights analogous to the turning point in the struggle for racial equality that was dramatized so powerfully in Mississippi Burning.

The case, known in law enforcement circles as "The Chickens and the Bulls,"dates from the late 1950’s and early 1960’s and involved a nationwide ring of blackmailers who posed as corrupt vive squad detectives and targeted closeted pillars-of-the-establishment: admirals, generals, congressmen, society doctors, Ivy League professors and high-profile film and television entertainers.  The ring operated for ten years in New York, Chicago, Washington and LA. As ruthless as it was brazen, the ring made millions and brought misery to scores of victims and their families before being broken up in a joint investigation by the FBI and the Special Rackets Squad of the Manhattan District Attorney’s Office which was led at the time by the legendary Frank Hogan—aka “Mr Integrity.”

The press conference that Hogan held in early March, 1966 to announce the ring’s breakup inspired this front page headline in the New York Times the next day, the wording of which is rather shocking by today's more diversity-sensitive standards:

The case is significant because it represents the first time that the American law enforcement apparatus cranked up on behalf of gay men who were routinely victimized by extortion schemes like the one described in “The Chickens and the Bulls.” Most of the victims in this scheme, as in other schemes like it, would have been married, or if not married, certainly not "out." In those unenlightened days those who did not pay up and were exposed could reliably count on losing their families, as well as their jobs, businesses or careers. Some victims were beaten to death by thugs whose intimidation tactics went too far. At least one victim, a US Navy admiral who'd been a decorated WWII hero, committed suicide.
Aside from its historical importance, the story was compelling---and attractive to the movies--- for many reasons, among them the fascinating character “arc” of the one of the ringleaders---a Jimmy Cagney-like tough from Manhattan’s lower west side named Edward “Mother” Murphy.” After tormenting gay men as an extortionist, Murphy, who was himself gay and was said to be at the Stonewall Inn the night of the infamous uprising in 1969, transformed himself into one of the gay community’s most ardent champions. In fact, his work on behalf of early AIDS victims led to him being named the posthumous Grand Marshal of the Gay Pride Parade in 1984, the gay community apparently unconcerned by, or ignorant of, Murphy's rather risque criminal past.

Below is a picture that gay activist and archivist Randy Wicker took of Murphy, “The Original Stonewaller,” riding with some of his entourage during a previous year's parade. Wicker told me he mounted a one-man campaign to derail Murphy's posthumous grand marshall-ship, but the gay community's memory was short and its ranks were swelling fast. "It was like that Stephen Sondheim song," Wicker told me. "Another hundred people just got off of the train." 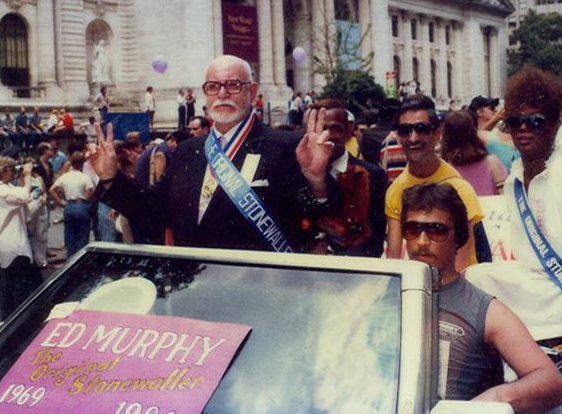 Posted by William McGowan at 1:49 PM