Adelson & The Elders: Live In Las Vegas! Reports Of Demise Are Premature 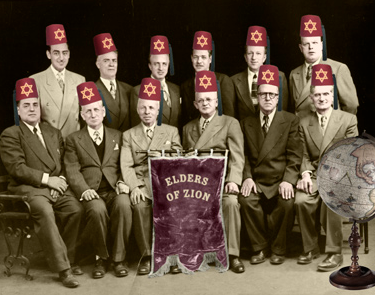 In 2009 the Forward ran a parody for the Jewish celebration of Purim announcing that "Elders of Zion To Retire."  According to the “report,” illustrated with the image above:

The Elders of Zion, the venerable and shadowy Jewish organization that controls the international banking industry, news media and Hollywood, has announced that it is disbanding so that members can retire to Florida and live out their golden years on the golf course.
“We had a good run,” said one senior Elder, reminiscing over old photographs of world leaders in his musty, wood-paneled office at an undisclosed location. “Maybe we ran the world for just a little too long. Anyway, now it’s Obama’s problem.”
After a humiliating year left most of its financial holdings, as well as the entire civilized world, on the verge of collapse, the organization has re-defined its mission in terms of bridge games and making it to restaurants for the Early Bird Special.

Apparently, bridge and early dinners in Boca did not agree. Yesterday's Washington Post reported that Sheldon Adelson, who has called himself "the world's richest Jew" gathered in Las Vegas with a gaggle of other Jewish political machers to receive a line of Republican 2016 presidential hopefuls angling to boost their campaign war chests in what GOP insiders call "Sheldon's Primary."
Fittingly, JJ Goldberg ran a correction to the Purim spoof in the Forward itself under the headline: A GOP Plan to Save the Jews: Buy White House   Goldberg's lede would be funny if the scene he describes wasn’t so contemptible:

Amid mounting alarm that anti-Semitism is on the rise in key spots around the globe — and fears that Israel could be a prime target — a prominent Republican group has come up with a unique approach to fighting back: gather a bunch of Jewish zillionaires at a casino in Las Vegas, announce plans to buy the White House in 2016 and invite leading politicians to come, hat in hand, and beg for permission to be the candidate.

Now, before you go accusing the Post (or me) of spreading anti-Semitic stereotypes, consider what the word means. Merriam-Webster defines “stereotype” as “an often unfair and untrue belief.” The World English Dictionary calls it “a set of inaccurate, simplistic generalizations.” Cardwell’s 1996 Dictionary of Psychology defines it rather more broadly as “a fixed, over generalized belief.” Nobody’s definition seems to include a straightforward recitation of facts that one would prefer remain hidden. That probably falls under the category of “a no-no.”

In fact, this is fascinating window into the way that pro Israel forces use the power of “historical anti Semitic canards” to intimidate critics of Israel, or critics of the overly expansive US-Israel “special relationship,” from raising questions that they find politically inconvenient. No matter how truthful the facts of any given situation may be, if that truth comes anywhere near a “historical anti Semitic trope,” it is verboten. The Economist cartoon that was censored in February, the one about the Israel lobby’s undue influence in the US Congress, was considered exactly such a trope; all it took was a little straw man misrepresentation to twist it, purportedly, into an image of the lobby’s domination of the US Congress. The outsized role that money from Adelson and other wealthy pro Israel figures is playing in GOP politics, could be seen as another such trope. As Eric Alterman once put it,

If a Jew-hater somewhere, inspired perhaps by The Protocols of the Elders of Zion, sought to invent an individual who symbolizes almost all the anti-Semitic clichés that have dogged the Jewish people throughout history, he could hardly come up with a character more perfect than Sheldon Adelson.

In the United States of Sheldon Adelson, Canards "R" Us.

Posted by William McGowan at 1:44 PM