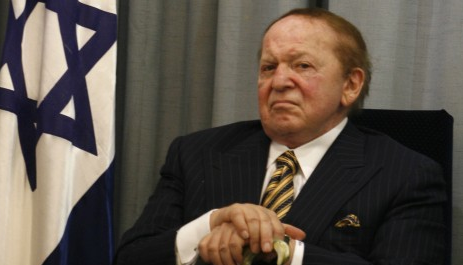 Calling himself the “richest Jew in the world,” international casino billionaire Sheldon Adelson has spent considerable sums in support of Israel, more than any single individual in the history of Zionism. In the US, he’s backed Newt Gingrich and then Mitt Romney in the 2012 presidential election, but only after both paid fealty to his ultra-hawkish, culturally chauvinistic pro- Israel views. He’s also contributed generously to the network of organizations loosely (sometimes too loosely) called the Israel lobby and to Senators and congressional representatives who stand behind it, such as Illinois Senator Mark Kirk and South Carolina’s Senator Lindsay Graham.  On the Hill, politicians in the lobby’s good graces get a lot of money and political protection, especially from primary challenges. Adleson is the biggest wallet around, its influence only expanding after the Supreme Court decision on Citizens United that lifted limits on individual contributions to political action committees under the aegis of free speech. According to most reliable sources, Adelson spent $100 million last fall trying to defeat Obama and other Democrats.


In Israel, Adelson supports the most conservative factions of the Likud government, and has condemned the “Two State” solution for peace with Palestinians. He’s also defended Israel’s illegal settlements in occupied Palestinian territory, as well as the expansion of these settlements, toward the realization of Greater Israel, as envisioned by the more militant and messianic elements of the Israeli right wing.


In early 2012, shortly after announcing his $10 million contribution to Newt Gingrich, but only after Gingrich reversed many of the positions he held on Israel in the past, Adelson was the subject of a report by NBC investigative correspondent Michael Isikoff. The NBC report highlighted videotaped remarks he had made back in 2010 to an audience in Israel which disparaged his own US military service. "While Adelson and Gingrich have bonded on the issue of a hawkish Mideast policy, especially over the threat of a nuclear Iran, some of the casino mogul’s comments could prove embarrassing,”Isikoff explained. The report continued:

In a talk to an Israeli group in July, 2010, Adelson said he wished he had served in the Israeli Army rather than the U.S. military—and that he hoped his young son would come back to Israel and “be a sniper for the IDF,” a reference to the Israel Defense Forces.

(Videotape of Adelson at a podium)


"I am not Israeli. The uniform that I wore in the military, unfortunately, was not an Israeli uniform.  It was an American uniform, although my wife was in the IDF and one of my daughters was in the IDF ... our two little boys, one of whom will be bar mitzvahed tomorrow, hopefully he’ll come back-- his hobby is shooting -- and he’ll come back and be a sniper for the IDF," Adelson said at the event.

"All we care about is being good Zionists, being good citizens of Israel, because even though I am not Israeli born, Israel is in my heart,” he said toward the end of his talk.


Adelson’s money did attract a lot of attention in campaign coverage, some of that attention noting that foreign citizens are under current law prohibited from making direct contributions to candidates and political action committees. Although Adelson is not an Israeli citizen, his wife is. John McCain, who is now on the receiving end of Adelson’s largesse, told PBS, “Obviously, maybe in a roundabout way, foreign money is coming into an American campaign.” But for the most part, the implications of Adlelson’s remarks, the issue of Adelson's underlying loyalty, went unexamined in the mainstream media.


However, Adelson’s unprecedented financial role in the 2012 campaign did prompt Eric Alterman of the Nation to write:


If a Jew-hater somewhere, inspired perhaps by The Protocols of the Elders of Zion , sought to invent an individual who symbolizes almost all the anti-Semitic clichés that have dogged the Jewish people throughout history, he could hardly come up with a character more perfect than Sheldon Adelson.


In a piece headlined, “Adelson, Gingrich and the Selling of America,”  blogger Justin Raimondo wrote:

That someone pursuing the agenda of a foreign country can hide behind some benign-sounding PAC and pour unlimited amounts of anonymous cash into our elections represents a real threat to our national security – and ought to make one think twice about our current campaign finance laws. Furthermore, it is a national disgrace that Miriam Adelson – who has not renounced her Israeli citizenship – can write a $5 million check and hand it to a candidate who is beating the war drums day and night on Israel’s behalf. Political contributions from foreign sources are illegal, and that’s the way it ought to be: but what about dual citizens? Should they be allowed to influence the American political process in favor of their other allegiance – and, while we’re on the subject, why do we allow dual citizenship, anyway?


These kind of frontal assaults seem to have triggered a shift in Aldeson’s messaging. Adelson's money has become central to the network of neoconservative, pro-Israel organizations led by Bill Kristol.  Insinuations that Adelson is an "Israel-Firster" cast these groups in an unfavorable light. My guess is that Kristol sent a memo and that Adelson might have read it.


In an exclusive interview with National Journal given earlier in the month after Obama sent a proposal to launch missile strikes against Syria as punishment for the use of chemical weapons, Adelson announced that he “would be willing to help” Obama on Syria because American credibility was at stake and because "America has to back up their commander in chief. ” This, National Journal found newsworthy in light of the antipathy Adelson had expressed for Obama in the past, and the huge load he had spent on unseating him during the 2012 election. Adelson:

Even if Adelson is not an Israeli citizen, his remarks from 2010 certainly raise questions that his more recent patriotic utterances, surely calculated to address those remarks, don't quite dismiss. Whether this indicates “dual loyalty” however, is hugely complicated to determine and whether that actually matters in his case is something I find hard to assess, the matter of motivation in any individual hard to discern in what is really a matter of the heart. And, historically speaking, there is a very valid reason why the issue is considered an anti Semitic canard.


But we are in a new more transnational age dictating that the question really should be on the table for discussion when the facts or remarks justify it--- and where an excessive deference to the historical canard discourages the candor that the US debate on Israel now lacks.


The issue of dual Israeli-American citizenship, which is different from the question of dual loyalty but often fuels questions about it, should definitely be part of the conversation too, for the sake of transparency at the very least. There are figures playing central roles in the American debate on Israel---some in politics, others in journalism, others in academia—who have dual citizenship but don’t think it relevant, taking refuge in the claim that the US-Israel relationship has some transcendent, “exceptional” quality that makes nationality unimportant. Am I wrong to be somewhat annoyed by people who tell me how to think about the US –Israeli alliance but imply bigotry when I ask about the passports they hold, why they chose to serve in the Israeli Defense Forces but not in the US military or if they plan someday to join close relatives in Israel who have made aliyah?  It certainly doesn’t have to negate their professionalism, their perspective or their reporting. But by implying that only someone believing in “ZOG” or some other dark conspiracy would ask these questions, or that it is a strictly personal matter, as some have, they do undermine some of their credibility.

More on this soon. It’s fraught territory and it gets very personal for some. But I think it's necessary to acknowledge the issue, though the long history of European and American anti Semitism mandates that any exploration be conducted with the utmost sensitivity and nuance.

Posted by William McGowan at 12:04 PM